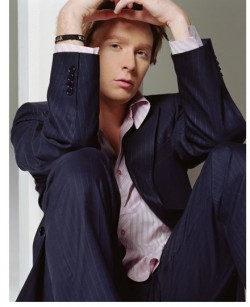 Clay Aiken is coming to Atlanta this week, but Claymates don’t start planning your all-night camp out to get tickets just yet. He’s not here for the “Tried and True” tour.

Gayken snubs Atlanta on his current tour to promote the new album. He only gets as close to the Gayest City in the U.S. when he stops in lesbian getaway Asheville, N.C., on Friday.

But we can hope that this former “Idol” does what another alum of the show did when he didn’t include Atlanta in the first announcement of his tour dates. Adam Lambert later added not one, but two stops in our little Southern enclave.

Gayken will be here, though. He’s in town Tuesday to tape a promo spot for a charity concert he played to benefit Georgia Public Broadcasting that’s set to air Aug. 1.

While in town, we want to know if he’ll also share Lambert’s penchant for cheap (female) strippers and Blake’s.