Claymates come out with support 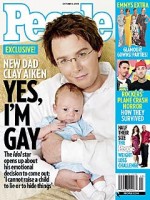 Reaction continues to dribble in to Clay Aiken’s surprising coming out in People. Well, surprising only in that he finally stated the obvious.

But nonetheless, Aiken’s getting lots of support, including from some locals who are fans or fellow “American Idol” competitors.

Erin Lee, a 32-year-old legal secretary from Stone Mountain, has seen Aiken in concert 25 times, but hesitates to describe herself as a Claymate. On Wednesday, she said she had become disillusioned over time by Aiken’s cagey comments about his sexuality and is relieved he’s finally letting it out. “The elephant is finally out of the room, thank goodness,” she said. “Maybe he’ll be happier and won’t be so creepy about it.”

Atlanta singer Vanessa Olivarez, who was on “American Idol” the same year as Aiken, said she respected his choice to stay private all these years about his sexuality but supports his move now.

“His career is established enough that it’s OK if he comes out,” she told Buzz on Wednesday. “He’s built a fan base with all these religious Christians. Clay himself is very religious. This will show them that you can be gay and religious.”

Olivarez said Aiken never said a word about his sexuality during the show in 2003 but “my gaydar — or Claydar — has always been beeping since I met him. It’s something everyone always knew.”