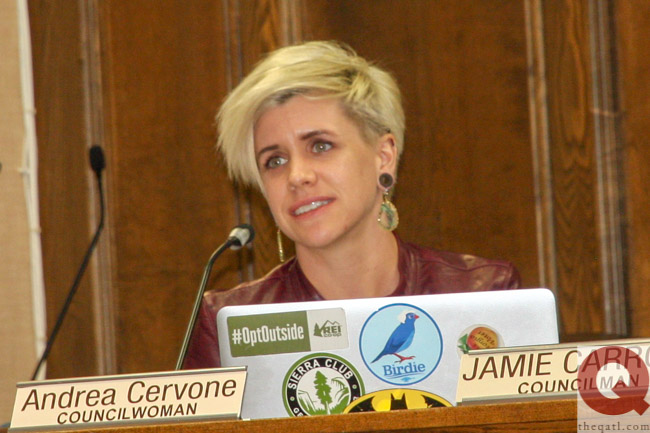 The regionwide effort to make metro Atlanta a safe space for LGBTQ people continued on Tuesday with the passage of a comprehensive nondiscrimination ordinance in Clarkston.

The passage of the ordinance makes Clarkston only the third city in Georgia with such protections.

“The intent of this nondiscrimination ordinance is to really set the standard and climate for what we will and will not tolerate in the city,” Council member Andrea Cervone (top photo), the sponsor of the ordinance, said during Tuesday's council meeting. “We’ve never had a mechanism like this in place in the city before to safeguard our civil and human rights, and the state doesn’t have one either.”

The Clarkston City Council passed the measure with a four to one vote, with one abstention.

The nondiscrimination policy would prohibit discrimination based on sexual orientation and gender identity in private employment, housing and public accommodations. The cities of Atlanta and Doraville are the only other municipalities in Georgia with those protections.

Until Tuesday’s vote, Clarkston’s nondiscrimination policy only had protections for LGBTQ city employees.

Council member Awet Eyasu said he supported LGBTQ rights, but criticized the ordinance as too broad. He pointed out that some of the protected classes are already protected under state law.

“The only thing that I will fully support is if [the ordinance] was gutted out to [only] the group that does not have the statewide discrimination protection,” Eyasu said.

Eyasu also said a lack of reports of discrimination in Clarkston showed the ordinance isn't needed. Council member Mario Williams, who co-sponsored the ordinance, hit back at that notion.

“A lot of the times with ordinances such as this, it’s common but erroneous to say nothing’s happened to warrant passing this ordinance,” Williams said. “We don’t know that, first of all. Second of all, it’s good to be proactive when you’re talking about the protection of people’s civil liberties and constitutional rights.”

Eyasu abstained. Council member Ahmed Hassan voted against the ordinance but made no public comments.

'It's to protect everyone'

The passage of Clarkston’s ordinance comes five months after Doraville approved its nondiscrimination policy. It’s part of an effort spearheaded by Doraville City Councilperson Stephe Koontz to use Doraville’s policy as a model for other similarly-sized cities across metro Atlanta.

Clarkston Mayor Ted Terry (second photo) pointed out Koontz and former Atlanta City Council President Cathy Woolard in the audience during Tuesday’s meeting. Woolard led an effort to pass a nondiscrimination policy in Atlanta in 2001. Cervone said she worked with both Koontz and Woolard on Clarkston's ordinance.

“The state of Georgia is one of three states in the country that has no civil rights protections for anybody,” Koontz told the city council. “Some people try to label it like it is a gay bill. It’s to protect everyone.”

“Whatever reason someone would have to discriminate against you, your city is saying that it doesn’t accept that as being OK,” she added.

To file a complaint under the ordinance, Clarkston residents must do so with the city clerk within 90 days of the alleged act of discrimination. A $50 filing fee is required, but that fee may be waived later in the process.

Both parties go to voluntary non-binding mediation. If the issue isn’t resolved there, the complaint is referred to a hearing officer. If the officer finds a violation has occurred, the offender can face a fine of up to $1,000, be sent to a nondiscrimination training and/or have their business license suspended or revoked. If the hearing officer recommends suspension or revocation of the offender’s business license, the city council will have the final decision in the matter.