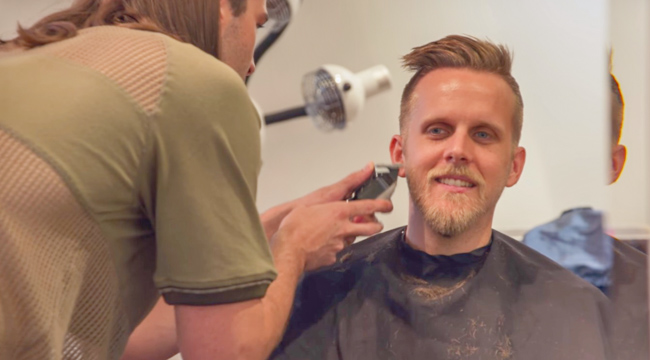 Clarkston Mayor Ted Terry gets the makeover of a lifetime on the new season of the popular Atlanta-based Netflix reboot “Queer Eye.”

However, when the “Queer Eye” producers first approached the LGBTQ ally about appearing on the show, he was apprehensive.

“I didn’t want to be out front. I thought that there were other people more worthy in the city that could use this help,” Terry told Project Q Atlanta. “But the producers were very adamant that they really wanted to tell the story of Clarkston. They felt it was a good opportunity to showcase in a positive way a community that is defying the anti-immigrant rhetoric that is coming from the White House.”

Clarkston in DeKalb County is a city that, according to the Guardian, has received more than 40,000 refugees over the past 25 years, making the self-proclaimed “Ellis Island of the South” moniker a fitting one. The city is also welcoming to LGBT people – Terry is a member of Mayors Against LGBT Discrimination – and the mayor was endorsed by Georgia Equality in his 2017 re-election.

In fact, the Trump narrative carried through to the title of Terry’s episode: “Make Ted Great Again.” Episode 8 was filmed in July 2017.

A big part of Terry’s makeover had to do with what he called his “resistance beard.” During the episode, friends of his call it a “dirty hippie beard” and compare him to “a younger Santa Claus” and “the goat from Red Riding Hood.”

Keeping with the theme, Fab Five design expert Bobby Berk said in the episode of Terry, “My first impression of Ted is not really mayor. Maybe more … mangoat.”

Terry also wanted to work on his public speaking skills, so culture expert Karamo Brown engaged him in a rap battle with a state champion in public speaking. With five 12-hour days of filming, a lot was bound to be left on the cutting room floor, and this scene was affected by that.

“I feel like I had a better version of the rap battle that maybe didn’t quite make the cut,” Terry said. “I remember being a little better than when I first saw it.”

Metro Atlanta businesses make cameos throughout the episode, with stops at Bacchanalia in West Midtown, Bill Hallman in Inman Park and Reunion Salon in Avondale Estates. The salon is where Terry’s resistance beard went to die.

Terry said he has kept up with what he learned from the Fab Five, using his new office space and hosting dignitaries and other officials at his newly redecorated house. The mayor and his girlfriend, Andrea, hosted a crowd that included state Reps. Park Cannon, Sam Park and Dar’shun Kendrick, City of Atlanta LGBTQ Affairs Coordinator Malik Brown, and others for a watch party the night Season 2 dropped on Netflix.

And for the beard? Terry said he's let it grow out a little bit.

“I’m not going to go back to the resistance beard, but I do plan on having a little bit of a well-maintained scruff for the foreseeable future,” he said.

Overall it was a positive experience for Terry and a big plug for the city of Clarkston.

As Terry said in the episode, “Sometimes you just have to let five gay guys into your life and see what happens.”