Radio cheapskate Clark Howard took part in the Atlanta Pride parade, glad-handing fans along Peachtree Street and sparking rumors that the once mayoral hopeful might be once again contemplating a run for City Hall next year.

Howard’s timing was pitch-perfect. He appeared in the Oct. 14 parade with Cox Enterprises, which owns the Atlanta Journal-Constitution and Howard’s radio home on WSB. The company knows a thing or two about being gay-friendly even if WSB Radio is home to a parade of wing nut conservatives. He recently reduced his hours on the radio, 2013 is an election year for Atlanta officials and the city’s current chief executive, Mayor Kasim Reed, doesn’t enjoy a warm and cozy relationship with the LGBT residents.

Howard (bottom photo from Pride parade) flirted with the idea of taking his penny-pinching ways to City Hall ahead of the 2009 race, but eventually demurred. His response when asked on the Pride parade route?

Howard told the AJC something similar in December, when he offered that as the parent of two young children, a political campaign would take him away from his family.

For his part, Reed again skipped the Pride parade – at least the second time since being elected – but did make an appearance at the VIP reception ahead of Pride’s kickoff party on Oct. 11 at the Georgia Aquarium (video above). In brief remarks, Reed referenced his attendance earlier in October at the Human Rights Campaign Dinner in Washington, D.C. That’s a bit ironic, since Reed hasn’t attended the Atlanta HRC dinner since 2009, before he won the election and took office. 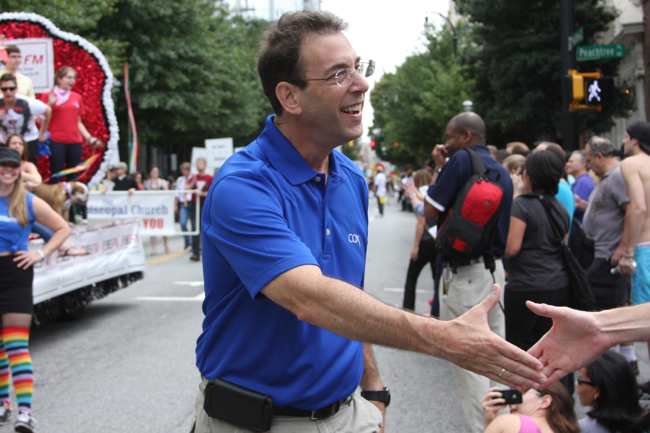