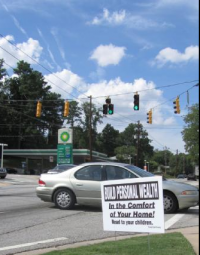 It appears that Keep Atlanta Beautiful doesn’t appreciate artist John Morse’s “Roadside Haiku” as much as we do, and now a WSB poll is asking for your votes on whether it’s art or litter.

The group for “a cleaner and greener Atlanta” is calling for the 500-sign installation—which currently peppers the city with affirmative messages in the form of bandit signs (photo)—to come down.

The new take on the old “LOSE 30 POUNDS IN 30 DAYS” street signs subverts the idea by giving expected messages like “Increase your personal wealth” a whole new meaning by pairing them with phrases including “Read to your children.” Other of Morse’s signs promote tolerance and decry bigotry.

“The ‘Roadside Haiku’ project is generating some controversy, which I guess is a good thing,” the artist wrote to supporters on Friday. “The local ABC-TV affiliate ran a story last night and has reran it three times today.”

The online version of WSB’s story is posted alongside an opinion poll. On Monday afternoon, votes in favor of the artist outweighed votes against “Roadside Haiku” 82 percent to 18 percent.

“Please, cast your vote,” writes Anne Dennington, executive director of Flux Projects, which sponsors the installation as well as other LGBT-specific artists and works in their inclusive roster of projects.

“Of course, we hope you vote with us, but even if you do not, vote to show that the arts spark community engagement and are deserving of more news stories.”

The artist himself is less diplomatic about which way to vote.

“If you get a chance, please take a quick moment to vote for art,” Morse writes.

Read our full story, including a promotional video, on “Roadside Haiku” before you weigh in.