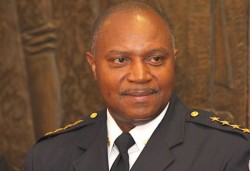 Atlanta Police Chief George Turner and the department’s LGBT liaison will face critics on Thursday, July 22 during a public meeting in Midtown to address public safety concerns among the city’s gay residents.

The Atlanta Police Department is co-sponsoring the 90-minute forum at Inman Middle School with City Council member Alex Wan, the council’s only openly gay member, to address public safety concerns. A gay couple was robbed at gunpoint in Piedmont Park on July 2, a transgender woman was pistol-whipped on July 9, a man was severely beaten on July 9 after parking his vehicle at the Eagle, and a public art piece on the Beltline created by a gay artist has been repeatedly vandalized.

In addition, the department has been criticized for its handling of the agency’s LGBT liaison.

Turner (photo) says he wants LGBT residents to engage the department on how it can best help them. He made similar remarks when Mayor Kasim Reed named him the city’s next top cop during a July 9 press conference.

“The Atlanta Police Department has a responsibility to keep all of our citizens safe,” Turner says in a press release. “Part of what makes Atlanta great is its diversity. The gay community has made many wonderful contributions to our city, and we want to be sure their voice is heard on public safety matters. We encourage them to engage us on how we can best help them stay safe.”

Police arrested six people minutes after the Piedmont Park robbery and arrested a suspect in the July 9 attack of the man who parked at the Eagle. The agency has also pledged to follow its own policies on notifying its LGBT liaison, Office Patricia Powell, when bias crimes occur. Police also recently announced the creation of a nine-person LGBT advisory board.

But Atlanta police continue to face criticism over their raid of the Eagle last September. The raid resulted in eight arrests—later thrown out in court—a federal lawsuit, sanctions for officers who orchestrated it, and continuing headaches for both Reed and the police department.

Wan, whose District 6 includes the Eagle and Piedmont Park, says the town hall is a forum for gay and lesbian residents to ask questions and learn more about how to stay safe.

“These attacks are disturbing, and I want to make certain my constituents – and others in the GLBT community – are able to ask questions they need to protect themselves,” Wan says in the press release.