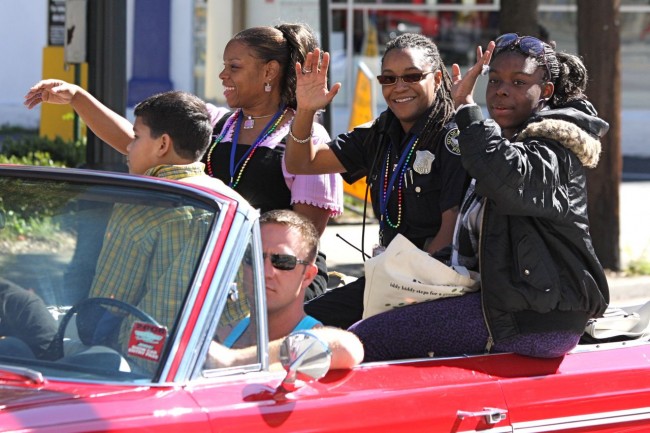 Atlanta’s new police chief said he will leave in place the department’s LGBT liaison, but “tweak” how the position is integrated into ongoing investigations that impact gay and lesbian residents of the city.

The comments from Acting Chief George Turner (bottom photo) came Tuesday as he, flanked by Mayor Kasim Reed, announced sweeping changes in the command structure of the beleaguered department. Turner publicly committed to keeping the LGBT liaison, a post created by former Chief Richard Pennington, and retaining Office Dani Lee Harris, who has served in the role for four years. 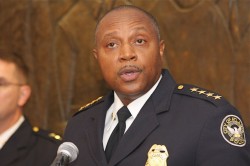 The Atlanta Police Department was harshly criticized by some LGBT residents and questioned by elected officials and political candidates in the wake of its raid of the Eagle last September. Harris was not notified about the undercover investigation leading up to the raid or the Sept. 10 event. She learned of the raid and eight arrests the next morning from a reporter.

Harris said Thursday that she’s pleased to remain as LGBT liaison and looks forward to meeting with gay and lesbian residents and business owners in the coming weeks. Turner said as chief that he plans to build stronger community relationships.

“Wherever God needs me is where I’m going to be,” Harris said. “I love this position. I love policing, but I love the community policing even more. My position allows me to be in the community and I am working in my community. You can’t get a better gig than that.”

The aftermath of the Eagle raid bled into the Atlanta Pride Parade on Nov. 1. Harris was selected as a grand marshal by the Atlanta Pride Committee prior to the raid, although the selection wasn’t publicly announced until 10 days after the raid. Harris rode in the parade in full uniform with her 10-year-old son and other family members in a red convertible (top photo).

Some critics asked Harris to not wear her uniform. She initially agreed to not wear the uniform, but reversed course in a “last-minute decision” after talking with other gay officers and her family. A security detail was added to Harris after the police agency grew concerned about her safety.