City stops event permits, but Atlanta Pride is not canceled 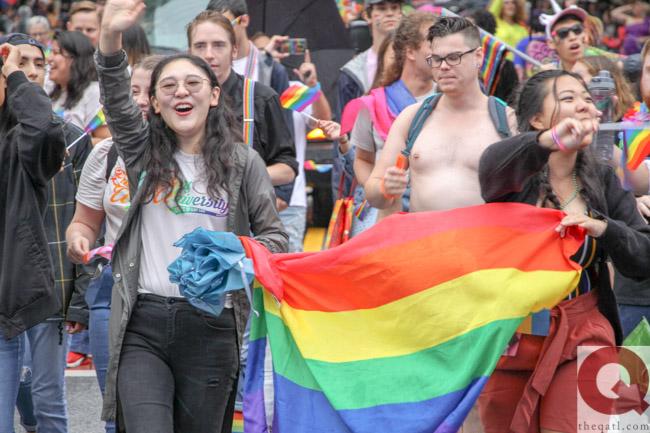 UPDATE | The story has been updated to include comments from City Council President Felicia Moore.

The City of Atlanta has not canceled the Atlanta Pride festival and other outdoor events scheduled for the fall, despite a news outlet reporting that it had.

Planning for the Pride festival and parade – scheduled for Oct. 9-11 – continues, Atlanta Pride organizers told Project Q Atlanta. WSB-TV reported Tuesday that the Atlanta City Council quashed the October event and other large outdoor events due to the coronavirus pandemic.

On Wednesday, a spokesperson for Mayor Keisha Lance Bottoms had a blunt response when asked if the city put a halt to the events: No.

On Monday, the city council ratified several executive orders from Bottoms related to the coronavirus pandemic. One of those orders puts in a place a moratorium on the city accepting permit applications for events. The order does not include a time frame or ban specific events. Bottoms can lift the moratorium at any time.

“The Executive Order directed the Office of Special Events and Department of Parks and Rec to refuse to accept any new applications for permits or sub-permits for or relating to events to be held in the City of Atlanta. Once this moratorium is lifted, those departments will accept new applications,” Michael Smith, the mayor’s press secretary, told Project Q on Wednesday.

“It did not cancel the events,” Moore said.

“As late as this afternoon, we’ve been told as long as it is safe to gather that our dates are fine,” Fergerson said late Tuesday.

WSB published a story to its website at 6:30 p.m. on Tuesday that declared the city council had canceled Pride, the Dragon Con parade and other events this fall. By Wednesday morning, WSB revised the story to walk back some of its dramatic claims, though it still incorrectly reported that parades for Pride and Dragon Con are “likely canceled this year.”

Smith pointed to the work of the Advisory Council on the Reopening of the City of Atlanta. That panel is expected to present recommendations on COVID-19 restrictions and restarting the city’s economy to Bottoms by May 15. That could provide guidance on when the mayor will lift the moratorium on event permits and what restrictions large events will face.

Moore said she's not expecting the moratorium to be lifted soon. She said the end of Gov. Brian Kemp's statewide shelter-in-place order on April 30 will lead to a resurgence of coronavirus cases.

“I'm not hopeful only in the fact that we, I believe, lifted the stay-at-home order too soon and in less than two weeks, we'll start seeing the response from that,” Moore said.

Fergerson said Pride officials are monitoring the application moratorium. She said Pride had started its annual permit process but had not received one before the moratorium was first put into place on March 16.

“Everyone is watching it and trying to figure things out. At this point, it is watchful waiting,” Fergerson said.

The coronavirus pandemic is likely to impact sponsorships and the financial support Atlanta Pride receives each year from donors, but it’s too early to tell by how much, Fergerson said. Some sponsors have said they won’t be able to donate as much as past years, while others have given more, she added.

“I anticipate that by June, I’ll know more about how that will pan out,” Fergerson said.

The decision to host the Pride festival in October won’t be based on finances but on safety, she said.

“We have a decent cushion in the bank to get us through the next few months. I don’t think the decision will be a financial one but it will be based on health interests and what the city tells us to do,” Fergerson said.

We’ve reached out to City Councilmember Antonio Brown, the only LGBTQ member of the council, for comment. We will update the post if he responds.

Scores of LGBTQ events have been canceled during the coronavirus pandemic, including the HRC gala in May and the Joining Hearts pool party in July.