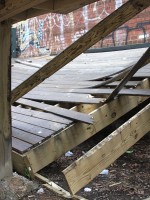 The East Atlanta lesbian bar My Sisters Room won’t face a fine from city building inspectors for a deck that collapsed June 12, despite the city having no record that the structure ever was inspected and permitted.

But if the bar decided to rebuild the deck, which has since been removed, it would have to pay double the usual fee for a permit, a city spokesperson said Wednesday.

“When the permit holder comes in for a new permit, they have to apply, they will have double the fee and the city will inspect their work as they build,” says Catherine Woodling, a spokesperson for Mayor Shirley Franklin. “That is the typical situation.”

Woodling says that Atlanta’s Bureau of Buildings, Department of Planning & Community Development does not have a fee structure in place to address situations such as the deck collapse at My Sisters Room.

The collapse sent 12 people to two hospitals for treatment of minor injuries. The incident happened about 1:30 a.m. when a crowd of about 75 people was on the deck enjoying the venue’s weekly Xplosion Thursdays. A few days earlier, My Sisters Room hosted a boxing event that included placing a makeshift boxing ring on the deck.

The bar remains closed for renovations. The bar’s owner has told Southern Voice that a portion of the deck was in place when the bar moved to the East Atlanta location in 2007 and they they later added to it.

Woodling says the city’s investigation into the matter is closed, but referred questions about a possible probe by fire investigators to the Atlanta Fire Department. A spokesperson for the department could not be immediately reached Wednesday afternoon.

On Friday, a fire official told CBS 46 that their records didn’t include a permit for the deck. The bar also did not include signs indicating an occupancy limit on the outdoor structure, which is a code violation, Chief Walter Parker told the TV station. Parker added that the fire department would open an investigation.