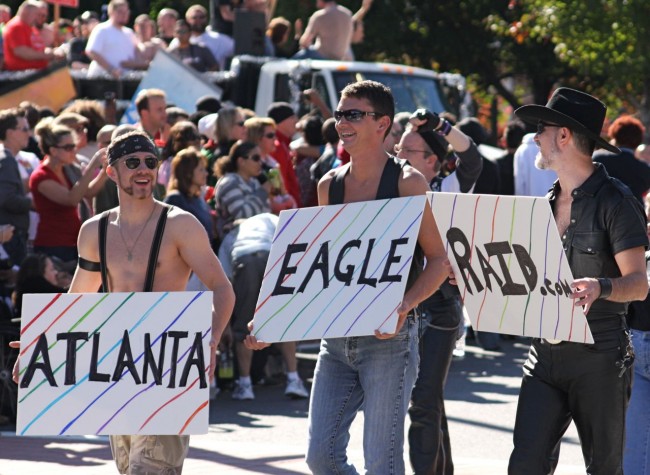 A national gay legal group is joining with an Atlanta attorney to file a discrimination lawsuit against the City of Atlanta and a handful of police officers for the controversial raid at the Eagle in September.

Lambda Legal will appear with Atlanta attorney Daniel Grossman during a press conference Tuesday morning in Midtown to discuss the lawsuit, which alleges officers from the Atlanta Police Department violated the Fourth Amendment rights of patrons and employees by illegally searching and detaining them when they stormed the bar Sept. 10 and arrested eight dancers and employees.

The lawsuit also alleges officers violated the First Amendment rights of people inside the bar by not allowing them question what was happening.

“The complaint is primarily alleging violations of the Fourth Amendment and also alleges violations of the First Amendment because you have a right to question and criticize police officers,” Grossman said early Tuesday. “When anyone at the Eagle questioned the officers, they were greeted with, ‘Shut the fuck up.'”

Grossman has been consulting with people arrested during the raid and helped launch the website Atlanta Eagle Raid to help document it.

The lawsuit also alleges a series of violations of state law, including false imprisonment, assault and battery, trespass and damage to property, Grossman said.

The text of the press advisory, which Adams also did not provide to Project Q:

Lambda Legal to Announce Discrimination Lawsuit Against City of Atlanta

(Atlanta, Georgia, November 23, 2009) — Tomorrow Lambda Legal will hold a press conference announcing a discrimination lawsuit against the City of Atlanta and officers of the Atlanta Police Department.

The raid resulted in eight arrests, three protests, calls from elected officials and political candidates for an investigation into police tactics, a public forum with police and LGBT activists and a public flap over grand marshals for the Pride parade earlier this month.