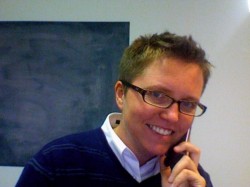 With just days before the Atlanta Pride Festival marks its return to Piedmont Park during Halloween thanks to a compromise with the City of Atlanta, parks officials announced that large-scale festivals can return to the park in 2010.

But Atlanta Pride officials, stung by the city’s ban on large-scale festivals in Piedmont in 2008 and forced to move the event to late October this year, say they won’t make a decision on scheduling the 2010 event until after the festival closes this weekend.

“We think that is fantastic that they are going to get the vents back in Piedmont Park,” says J. Sheffield (photo), Pride’s event manager. “It’s set up week. It’s game time. The only thing we can think about right now is 2009. I can promise you that once we wrap up the fetsitval, it will be the very first thing that we will talk about. There is just no way we can talk about it right now.”

Dianne Harnell Cohen, the city’s parks and recreation chief, announced Monday that Piedmont would again be home to outdoor festivals that attract more than 50,000 people. The region’s recent heavy rains have played a major role in the reversal, a ban that sent festival organizers scrambling last year to find venues large enough to host them. Pride’s move in 2008 to the Atlanta Civic Center took a steep financial toll on the annual event.

“We made a commitment to the festival organizers that as soon as conditions warranted, they could return to Piedmont Park” Harnell Cohen says in a statement on the city’s website. “We look forward to a festi-full 2010.”

In addition to removal of the watering ban, the Piedmont Park Conservancy initiated and funded a water-well project to reduce the park’s dependence on the city’s potable water supply, which helped pave the way for a return to the park for festivals, she adds.

City officials also announced a tentative schedule of festivals in 2010:

The Atlanta Dogwood Festival: April 16-18
The City of Atlanta Jazz Festival: May 28-30
The Atlanta Pride Parade and Festival: TBA after the 2009 event
The Atlanta Journal-Constitution Peachtree Road Race: July 4
Screen on the Green: May 27, June 3, 10, 17, 24

Sheffield says that several factors will contribute to the decision on when to hold the festival in 2010, including the availability of the park and financial considerations. Returning Pride to its traditional late June date would mean organizing and funding two festivals within eight months of one another.

This year, Pride officials organized Stonewall Week in late June, a slate of about two-dozen events with community partners to commemorate the Stonewall Riots that took place on June 28, 1969.

“There are just so many pieces that hgave to be looked at critically. If we did try to make some call right now our biggest fear would be that we would make the wrong decision,” Sheffield says.

The Atlanta Pride Festival opens on Friday and continues through Sunday.

Win a pair of free tickets to the Official Pride Kickoff Party at the Georgia Aquarium from Project Q Atlanta. Click here, read the story, and tell us in the comments section on that page when and where you’d like to see Pride 2010.