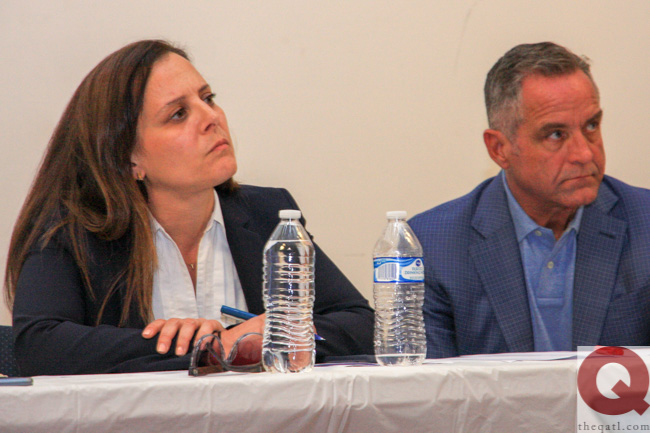 More than three-quarters of the victims of an HIV housing crisis have avoided eviction and the city continues trying to process a backlog of millions in unspent federal funds.

Several city officials gave updates on the city’s long-troubled Housing Opportunities for Persons With AIDS (HOPWA) program at a community meeting on Thursday. Over 100 people crowded into the Phillip Rush Center annex in Candler Park for the meeting.

In early July, the city terminated the contract of HOPWA agency Living Room, claiming the non-profit wasn't complying with federal regulations. Living Room officials sued the city, arguing it was out to “destroy” the agency and that the city owed it about $500,000 in HOPWA funds.

Stuck in the middle were about 230 Living Room clients who were in danger of being evicted because Living Room was unable to subsidize their rent.

About one-third of those clients have had their housing situation stabilized, according to Cathryn Marchman, executive director of Partners for Home.

“In other words, their housing has been secured and they are with a long-term subsidy and they are good to go,” she said Thursday.

Partners for Home manages the city’s homeless services grant from the U.S. Department of Housing & Urban Development. The non-profit is running a housing relocation effort to address the eviction crisis.

Some 110 former Living Room clients have been referred to other HOPWA agencies for assistance, according to Marchman (top photo left, with Kirk Rich, co-chair of Atlanta Mayor Keisha Lance Bottoms' LGBTQ Advisory Board).

“They are working with those providers to address their housing instability and make sure that they remain where they are or begin the relocation efforts,” she said.

The city has not been able to reach some 40 former Living Room clients. The housing relocation team has called, sent out mailers and knocked on their doors to try and track them down, according to Marchman.

“We will continue those efforts to reach out to individuals to make sure that they are connected,” she said.

Living Room is one of many HOPWA agencies that have complained to the city in recent years about massive delays in receiving HOPWA funds.

The U.S. Department of Housing & Urban Development distributes HOPWA funding to cities, who are then responsible for distributing the money to housing organizations. Those groups use the money to pay for rent and other services for people living with HIV. The City of Atlanta oversees HOPWA funds for 29 counties across the region.

The city has failed to spend $40.1 million in HOPWA funds, according to HUD. It’s one of the reasons that some 100 HIV activists, doctors and researchers sent a letter to the city expressing a “total lack of faith and confidence” in its ability to manage HOPWA.

The city contends the unspent amount is actually $31.6 million. Jeff Graham, executive director of Georgia Equality, called on the city to publicly release a written analysis of its HOPWA figures.

“That $40.1 million was from a letter that HUD wrote to the City of Atlanta,” he said during the meeting on Thursday. “So nobody’s making that up. HUD is making that up, not the community.”

Graham, who is also on Bottoms' LGBTQ Advisory Board, compared the situation to when Fulton County’s health department failed to spend $8.7 million in federal funding to fight HIV in 2015.

“They claimed that all of their money had been spent, when in fact there were millions of dollars unspent, and it did not come to light until the members of the Fulton County Health Department were willing to allow members of the community to come in and actually look at their analysis,” he said. “So if you really want to be transparent, I would encourage the City of Atlanta to do the same thing.”

Roosevelt Council, Atlanta's chief financial officer, said that they would release that information.

The city is working on reimbursing the HOPWA agencies, according to Jon Keen (second photo), the city's deputy chief operating officer.

“Some of our project sponsors have no outstanding reimbursement requests, and for those that do, we’ve been working very closely with them to address the outstanding issues and processing their payments in a timely manner,” he said.

But the city is now caught up on PIHC’s payments, according to a Facebook post by Lehman on Wednesday. Lehman said he met with Council and Carmen Chubb, the chief of staff for Bottoms.

“Happy to report all of our processed invoices have been paid,” he wrote. “The city is also expediting the additional invoices we recently submitted.”

The city continues working on providing a $1.5 million emergency advance to eight entities affected by the Living Room crisis. A city council subcommittee approved the emergency aid on July 9, but the full council wasn’t able to vote on it before going on a two-week recess. That prompted activists, doctors and researchers to demand an emergency meeting of the council to expedite the emergency aid.

But Council nixed the meeting.

“The CFO does not agree that a special meeting for the emergency funds is warranted,” Press Secretary Michael Smith told Project Q on July 19. “We are moving forward.”

The full Atlanta City Council will vote on the legislation on Aug. 5.

But Partners for Home and the city are working on tweaking how much of the money goes to which entities, Marchman said Thursday.

“Partners for Home is making recommendations to change the legislation based on our current predictions and forecast of the need,” she said. “And the need is being reported to us by providers who are taking on additional capacity. Some providers have said they don’t need additional money to serve X number of new people. Other providers have said they can serve X more people in this housing crisis, so we need X more dollars.”

Attendees of Thursday’s meeting criticized the city for canceling four out of the last five meetings of its HOPWA Advisory Council. The July 16 meeting was cancelled just 15 minutes before it was to begin.

The city is finalizing a date for the next meeting, according to Keen.

“We wanted to make sure that we had enough content to make sure that those are productive discussions, so that group is certainly still an important part of that process,” he said. “So it will continue, and it will not be delayed because of the restructuring plan.”

The city announced the restructuring plan on July 18. The city is planning to move HOPWA oversight from the Office of Grants Management and Office of Human Services and to the Continuum of Care department, which is managed by Partners for Home. That change wouldn’t go into effect until the fall.

Partners for Home is negotiating with the city on what it needs in order to run HOPWA effectively, according to Marchman.

“Myself and my team and my board are taking this incredibly seriously and recognize the implications of what this means, the lives that would be impacted by us doing this work long-term and we really want to come into this with open eyes and really acknowledging that we’re not going to go into this unless we can do it well and do it right,” she said Thursday.

UPDATE | Smith followed up with Project Q to dispute Lehman's claim about the amount that the city owed PIHC.