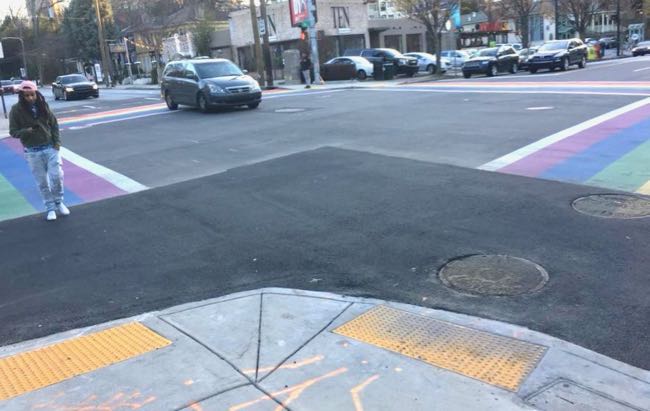 City of Atlanta officials say damage to the celebrated rainbow crosswalks earlier this year was paid for by AT&T and not the city.

The northeast corner of the LGBT-themed splash of color at the intersection of 10th Street and Piedmont Avenue in Midtown was paved over in February, and repairs were finished about a month later. City officials told Project Q Atlanta on Tuesday that repairs were handled by AT&T subcontractor Ansco & Associates.

The city spent $196,000 to install the rainbow crosswalks over the July 4th holiday last year. The price tag includes a year of maintenance and upkeep from contractors before the city's public works crews take responsibility for them, Atlanta officials said at the time. The crosswalks are expected to last 10 years.

In June 2017, then-Mayor Kasim Reed pledged to install the rainbow crosswalks – permanently – after volunteers raised funds for a temporary version during Atlanta Pride in 2015. A petition brought renewed publicity to the crosswalks earlier in 2017. Reed said the crosswalks would return during an announcement on June 12 – the first anniversary of the Pulse massacre in Orlando.