City of Atlanta officials: ‘We are under a crisis’ with HIV 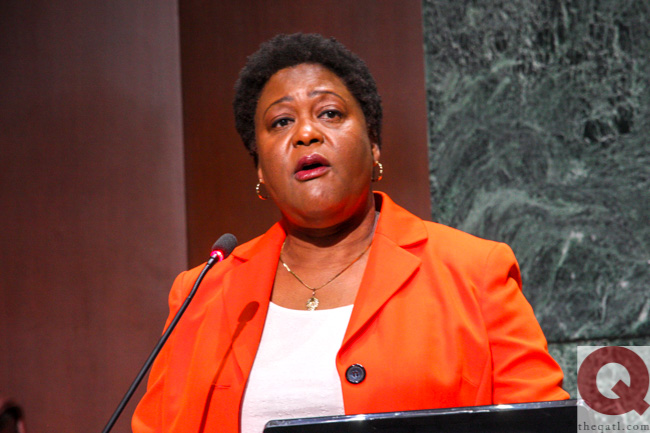 City of Atlanta officials apologized for how the city has addressed its HIV epidemic, vowing to do “whatever we can” to tackle the rising rate of infections and fix issues with its federally-funded HIV housing program.

The comments came during an Aug. 30 briefing on the city’s HIV epidemic at Atlanta City Hall. It was the city's first-ever public briefing on HIV, according to event organizer Devon Barrington Ward, senior policy and advocacy advisor at the National Black Leadership Commission on AIDS.

Metro Atlanta has the fourth-highest rate of new HIV infections in the U.S., according to the Centers for Disease Control & Prevention. Black gay and bisexual men in their 20s account for an alarming number of these new diagnoses.

“We have the technology, we have the dedication, we have the research that shows us the way to ending this in our lifetimes, but here in Atlanta that crisis continues,” Graham said. “For far too many young people, it might as well be 1983, ‘84, ’85, because for their lives, things haven’t changed that much.”

Leaders of local agencies with HOPWA programs said recently that major delays in receiving grant money, mistakes in the application process and inconsistencies in funding decisions have led to widespread concerns over the ability of the agencies to serve their clients. The city held a briefing to address HOPWA issues on Aug. 21.

“I just want you to know that the City of Atlanta – we get it,” Moore said at the Aug. 30 HIV briefing. “And we understand that we are under a crisis and that the City of Atlanta is one entity that needs to – particularly its elected officials – to pay attention and to participate in trying to do whatever we can, whether it’s related to treatment or housing or just getting the awareness out into the community about HIV and AIDS in our community.”

“I was sorry then and I’m sorry now for what we’ve done wrong in the past,” he said. “None of us can go back and change that, but all of us can fix things going forward.”

Rashad Taylor, the city’s Chief Equity Officer and leader of the city’s office of diversity and inclusion, noted the $100,000 earmark that Mayor Keisha Lance Bottoms included in the city budget to fight HIV/AIDS.

“This $100,000 is really just the first down payment toward the Bottoms' administration’s commitment to reducing HIV infections in the City of Atlanta,” Taylor said.

But some participants on a panel of people living with HIV took issue with Taylor’s comments.

“I hear all of these people lauding this $100,000 budget line item amount,” said Nina Martinez, a public health analyst who has been living with HIV since she was an infant. “I’m not really sure what we’re applauding.”

“If we have over 30,000 people living with HIV in the Atlanta area, $100,000 isn’t going to go very far, and I refuse to sit here and have that amount be called a down payment because life is not on a layaway plan,” she added.

Jennifer Barnes Balenciaga, a transgender woman and liaison for Cannon, called the lack of data available for trans women with HIV “unfortunate.”

“One thing that bothers me is that I know our numbers are too low,” Wortley said. “We rely on what gets reported to us, and if a case doesn’t get reported to us as transgender, then we don’t know.”

Wortley said the latest available numbers on rates of new HIV infections are from 2016. Numbers for 2017 will be released at the end of this year.