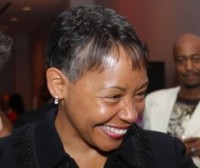 In a move to curtail violations of the law, City Council President Lisa Borders (photo) led the charge Monday to issue a waiver of Atlanta’s usual Sunday bar hours for Atlanta Pride weekend, set this year for Oct. 31-Nov. 1.

The change would extend hours in licensed bars to sell alcohol from midnight on Sunday Nov. 1 until 2:30 a.m. on Monday Nov. 2. Sunday sales normally stop by law at 12 a.m.

Borders, a leading contender in the mayoral race, was endorsed by Georgia Equality last month and boasts many gay supporters. At her behest, City Council member Clara Smith introduced the measure to extend Sunday alcohol sales for Pride, and all 14 council members present at Monday’s meeting signed it.

The waiver is due to be approved by the City Council Public Safety committee on Oct. 13, and moved back to the full council for a final vote on Oct. 19. It reads, in part:

WHEREAS, the City of Atlanta recognizes the need to represent the
expressed interest of its citizens, visitors, and licensed
establishments in celebrating special events of such a festive nature;
and

WHEREAS, the Atlanta Pride Celebration is scheduled to occur Friday,
October 30, 2009 through Sunday, November 1, 2009 ; and

WHEREAS, a multitude of licensed establishments have expressed an
interest in modifying the current allowable hours of operation at their
establishments so as to accommodate the festive nature of this special
and unique event.

NOW, THEREFORE, IT IS HEREBY ORDAINED BY THE COUNCIL OF THE CITY OF
ATLANTA, GEORGIA as follows: