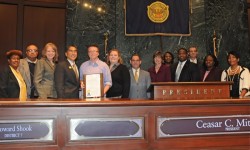 You know it’s Pride week, right? If not, you’re behind even the Atlanta City Council, which broke from the mundane tasks of property acquisitions and ordinance reading Monday to recognize organizers and participants of Atlanta Pride with a proclamation.

Whereas, The Atlanta City Council is pleased to welcome the more than 300,000 attendees to the 2010 Atlanta Pride Festival, one of the largest such gatherings in the nation; and

Whereas, The official kickoff party will take place Friday, October 8th at the Georgia Aquarium with the festival taking place at Piedmont Park on Saturday, October 9 and Sunday, October 10, 2010; and

Whereas, Now celebrating its 40th year, the Atlanta Pride Festival will feature 17 different artists representing genres from hip-hop and R&B to country and rock. The artists will include Kimberley Locke, Antigone Rising, Niki Haris, MEN and more;and

Whereas, The Atlanta Pride Festival, organized by the non-profit Atlanta Pride Committee, promotes unity, visibility and self-esteem among lesbians, gay men, bisexuals and transgender persons and translates into an annual economic impact of more than $28 million dollars metro Atlanta; and

Now Therefore Be It Resolved that, We, the members of the Atlanta City Council, and on behalf of the citizens of Atlanta, hereby recognize organizers and participants of the 40th Atlanta Pride Festival on this the 4th Day of October 2010.

The proclamation, something the Council passes ahead of Pride most every year, came the same day Mayor Kasim Reed plans to host a rooftop reception for Pride organizers, sponsors and supporters. On Wednesday, Wan joins with City Council member Lamar Willis for their own Pride reception.

Pride organizers recently announced a slate of 120 grand marshals for Sunday’s parade. Late last month, they published the full schedule for the event, which opens Friday and runs through Sunday.