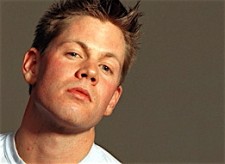 As he heads to Outwrite Bookstore on Tuesday with his fifth novel, author Christopher Rice talks about how he’s grown not only as a writer, but from out of the shadow—and some perks—of his famous last name.

“I’ve moved from what some people called Gothic to more Noir,” he adds.

Since “A Density of Souls” stormed gay fandom when Rice was just 22, the writer has published five novels. All four of his previous works became New York Times Bestsellers.

“I came out of high school hungry for suspenseful thrillers that included gay characters along with straight characters. The twists are still there, but I’ve moved to a different part of the country, so I was very influenced by Southern California’s culture and its rich history of detective novels,” Rice says.

In his fifth novel, “The Moonlit Earth,” which Rice introduces to gay Atlanta at Outwrite on Tuesday, the highly anticipated suspense comes as a woman must act to save her gay brother’s reputation—and his life—as he and a Saudi male companion are accused of a terrorist bombing in Hong Kong.

“It’s my first straight-woman-gay-male pairing since ‘The Snow Garden,’” Rice says. “This time, it’s the sister and her brother, but I think readers will notice that now I’m more focused on redemption as a theme for all of my major characters, gay and straight. You find them taking responsibility for what they’ve done in their past.”

The Outwrite signing is a line-ticketed event. Admission is free with the purchase of “The Moonlit Earth.” Buy the book now to reserve your place in line.

In the novel, Rice also takes a very timely opportunity to delve into homosexuality in Islamic culture through the character of Abid, the man with whom the brother is involved.

“Homosexuality is so commonplace in that culture due to segregation of genders,” Rice says he learned from research for the novel.

Too much more will give away the plot twists sure to keep readers on the edge of their seats as the intrigue takes its characters around the globe and into family secrets.

As Rice approaches 30, he says that his writing isn’t the only thing that has changed in the last decade. As the son of “Vampire Chronicles” writer Anne Rice and the late poet Stan Rice, he got a lot of attention that was more for them than for him, he says.

“In the beginning, there was a huge flurry of media attention because of my last name, but it’s not at the fever pitch that it was,” he says. “There are no moments anymore of being rushed from the airport to the ‘Rosie O’Donnell Show’ then rushed across the street to Fox News for interviews.”

That experience may be once in a lifetime, but Rice says if so, that’s OK with him.

“The test for me as a writer was, if that’s what I was in it for, I would have bowed out by now. Now I’m in it to write books that I would want to read. I’ve got a lot of advice from my mother, but that one I should frame and put above my desk. I’m just lucky that the kind of book I want to read is what some other people want to read as well,” he says.

That apparently goes double in Atlanta.

“Atlanta has hosted some of the most well attended and exciting book signings I’ve ever done,” Rice says. “Part of that is because Outwrite does an amazing job, but I think there is just this big gay Southern readership for my work.

“And I have to say, the men here are just hot,” he adds. “Clean cut repressed Southern boys are hot, so yeah I love Atlanta.”