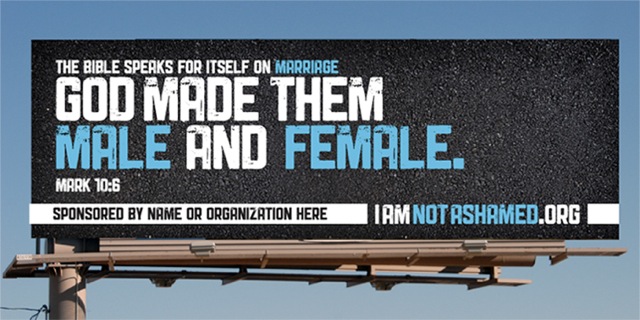 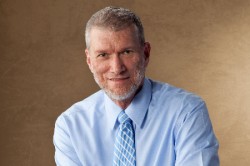 Fight! Fight! You know how we enjoy a good schoolyard scuffle. This one’s over an anti-gay marriage billboard erected OTP, gay media coverage of it and whining from the bigots over their treatment. Let’s break it down: I Am Not Ashamed campaign slaps up a billboard on Highway 53 -- light years away from Midtown between Flowery Branch and Gainesville; that’s so OTP for you clutch-carrying Midtown gays – proclaiming that gay marriage is bad. Not in so many words, but something like this: The Bible Speaks For Itself on Marriage. God Made Them Male and Female. The messaging also comes in anti-abortion (You Knit Me Together In My Mother’s Womb); theocracy (Blessed Is The Nation Whose God Is The Lord); and creation (For In Six Days The Lord Made The Heavens And The Earth). But talking about marriage in Gainesville is like mentioning Sarah Palin to a group of tea baggers. They respond. An irritated lesbian snaps a photo of said billboard, no doubt from the bed of her pickup, and sends it to the GA Voice. The gay newspaper then writes it up, with the online headline “Gainesville, Ga., billboard demeans same-sex marriage.” They also give the anti-gay marriage folks a chance to blather on about it. Answers in Genesis, the sponsors of the billboard campaign, responds by calling the GA Voice “intolerant” with an “anti-Christian agenda" in their own blog post. Ken Ham (photo), AIG's president, is not going to take this bent over a church pew. Now, the fight’s on! The marriage bigot folks continue, even generously offering their suggestion for the headline the GA Voice should have used.

It’s all in the way you say things, isn’t it? How about a headline that states, “Billboard quotes Bible on Marriage” or “Billboard quotes Jesus on Marriage”? No, a “gay activist” newspaper wouldn’t want a positive message like that. Because of the obvious anti-Christian agenda, they show their intolerance for the Bible even in the headline. Maybe we should have an article in response, something like, “Article demeans the Bible on marriage?” After all, we use the billboard message to just let the Bible speak for itself.

And then they whine about how they are persecuted by intolerant folks like those gay-loving religion bashers at the GA Voice.

Now, there are those who don’t agree that marriage is to be only a man and a woman. And they are obviously free to believe this (even if we believe, based on the Bible, they are wrong). Of course, people who disagree usually call us intolerant, as they want us to allow all views in regard to marriage. But they themselves don’t want to allow the view that marriage is to be only between a man and a woman, and it is God’s Word that reveals to us the origin and meaning of marriage because God’s Word is the absolute authority.

Then they fall into the oft-repeated refrain by marriage bigots – that allowing gay marriages would break down the definition of marriage and then there would be a marriage anarchy free-for-all and straight people wouldn’t be able to figure out whom to marry. Oh, and that all gays are anti-religion atheists. Then they complain that the billboards aren’t political right before they talk about the success of the Republican takeover on Tuesday. Then, in their best imitation of Jimmy Swaggart sleazy TV preachers, they ask for money. Support our anti-gay billboard campaign because we’re under attack! Then those mean old gay activist, anti-Christians over at the GA Voice respond, making the (quite accurate) observation of the irony of marriage bigots complaining about intolerance. All in all, an amusing back and forth. Takes us back to the elementary schoolyard when the bully got called a bully and then cried about it.