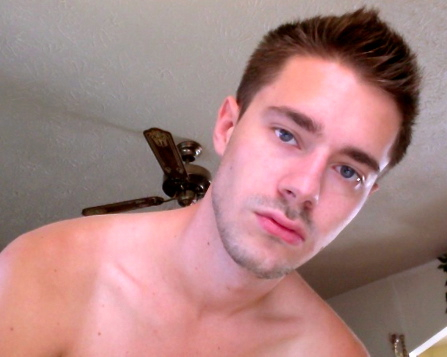 Just as we got excited about the movie’s local angles and compelling cast – which still includes indie fave Maria Conchita Alonso – Riddlehoover and Alonso both contacted us to remove Crocker’s name from the cast list, and he was quickly edited out of the Indigogo crowdfunding video and pitch (above) for the movie.

“Chris Crocker is no longer involved,” Riddlehoover wrote in a very friendly note just a day after thanking us for the article and for suggesting to readers that you can help make the film happen. It’s shooting in Atlanta and the north Georgia mountains next year.

Alonso was a little more effusive in her comments, and a lot more upset.

“I would like to send an email regarding my ‘involvement’ with Chris Crocker which is NONE!” Alonso wrote. “I do not like this kind of publicity which is NOT true.”

Well, it was true for a bit, Maria, but it’s clearly not any more. Let’s see… Keep Maria Conchita Alonso happy, or stand by casting Crocker? Seems like Riddlehoover made a smart choice.

Of course, Riddlehoover’s project is still an interesting and worthy endeavor for gay Atlantans even without Crocker’s tabloid mess. Why? Not only because of the director’s reputation, but because remaining in the cast are a gaggle of gay hotties with real cred, including but not limited to singer and Moring Fix fave Josey Greenwell, Jared Allman of “Girls Who Like Boys Who Like Boys, who appears in the promo video above, as well as Out On Film darling Charlie David (last year’s “Judas Kiss,” the 2009 festival’s “Mulligans,” and TV’s “Dante’s Cove.”).

Watch Riddelhoover’s pitch for the movie above, then go to Indiegogo and see how you can help get gay cinema to Georgia and – dare we hope? – some of the project’s out-of-towners to our local bars, restaurants, parks and other places of gay play.