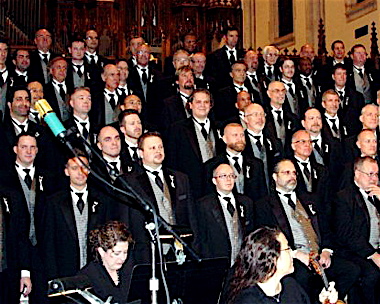 The Atlanta Gay Men’s Chorus winds up a five-city tour of the state right back at home in Atlanta with three performances of their “Georgia On Our Minds” concert scheduled for Friday and Saturday.

Not since “The Adventures of Priscilla, Queen of the Desert” has there been this large of a group of gay men singing while cruising the highway in a bus. And like that gay classic movie, the men of AGMC (photo) are changing hearts and minds along the way, says AGMC Executive Director Keith Fenton.

“The welcome and response we received from all of the cities in which we performed this past weekend exceed all of our expectations,” Fenton says. “With sold-out performances, multiple standing ovations, to visually seeing the impact the performances had on the audiences, The Atlanta Gay Men’s Chorus certainly achieved its mission ‘to entertain, educate, and connect audiences and members through music that is distinguished for its creativity, diversity, and artistic excellence.’”

With the backing of Macy’s, the 100-voice chorus started the tour March 19 in Macon and moved on to Savannah and Augusta. On Thursday, their final whistle-stop performance takes place in Athens before the two-day, three-show finale in Atlanta on Friday and Saturday.

Expect classics and more modern standards in the two-part show.

“Journeys,” the first part of the program, includes Wagner’s “Pilgrims Chorus,” selections from “Sinfonia Sacra” by Daniel Pinkham, and classics such as “He Ain’t Heavy, He’s My Brother,” Billy Strayhorn’s “Take the A- Train,” and the timeless “Georgia On My Mind.” Part two of the concert features highlights from the AGMC’s “Shaken, Not Heard: Stories of Gay Men, Faith and Reconciliation” from last season.

For a measure of the praise that the tour has inspired in our sister cities, Fenton shared some comments the chorus received from audiences around the state:

“I have experienced many great things at my home church–Asbury Memorial United Methodist Church–but I have never experienced ANYTHING like I did today. I am so thankful that I attended your concert at AMUMC today. The performance was unique, thoughtful, and tremendous. I thank the Good Lord for having such an experience.”

“Thank you so much for bringing such an amazing program to Augusta! You guys hit the nail on the head with this performance! My partner and I laughed and cried, and was truly touched by your show! Please come back in the NEAR future. We love you!”

“Thank you for a moving and touching performance at Theatre Macon. No pun intended, but you all struck such a chord in me and reminded me that of the bond we all share and the love we all can feel. I hope we can look forward to having you all back in the future. I wish you all continued success on your tour!! Bravo!!”