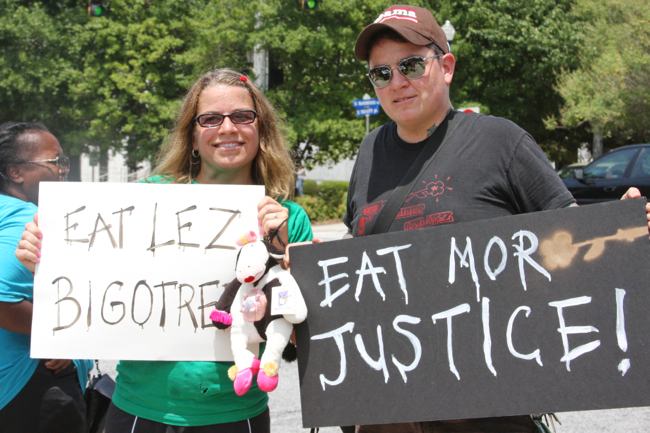 Chick-fil-A, caught this week sucking on the teet of an anti-gay marriage group when they were supposed to be backing away from such organizations, broke its silence on Thursday. Their take? They won’t back down from anti-gay groups.

The Atlanta-based company refused to respond publicly this week when a Chicago politician said Chick-fil-A promised him that it would end its financial support of groups that opposed gay marriage. Alderman Proco “Joe” Moreno publicly celebrated and the Illinois-based Civil Rights Agenda publicly cheered the company on Tuesday.

But on the same day, Chick-fil-A President Dan Cathy, who ignited a national firestorm with his anti-gay comments in July, tweeted a photo (below) from the start of the 200-mile Ride for the Family, an annual event for straight married couples organized by the WinShape Foundation. That’s the Chick-fil-A operated marriage retreat in north Georgia that bans gay couples and funnels money to groups that actively oppose same-sex marriage.

The Ride for the Family, in turn, raises funds for the Atlanta-based Marriage & Family Foundation, which lists its address as the same Buffington Road locale that’s also home to Chick-fil-A’s corporate offices in College Park, which is south of Atlanta. And that foundation, according to the Advocate, is among the top anti-gay recipients of Chick-fil-A cash.

The Marriage and Family Foundation was not only included in the investigation by Equality Matters of the fast-food chain’s questionable giving history, it was identified as the top antigay recipient in 2010. WinShape had given more than $1 million to the group in 2010 alone.

The Marriage and Family Foundation was created as the “implementation and funding arm” for something called the Marriage CoMission, which Equality Matters says is host to an annual conference about the supposed decline of marriage. The conference has been attended by the founders of the National Organization for Marriage and Exodus International, which had once focused on changing people from gay to straight. The Cathy-family group originally was intended to contribute to multi-million dollar public awareness campaigns about its values.

The conflicting messages – Chick-fil-A seemingly pulling back on its financial donations to anti-gay marriage groups while its president joins them in a motorcycle ride – prompted the Human Rights Campaign to blast the company. It also pushed Chick-fil-A to finally respond publicly by posting a brief statement to their website.

Their message was clear: We won’t back down from supporting programs that “strengthen families and enrich marriages.”

Chick-fil-A: Who We Are. A Response to Recent Controversy.

For many months now, Chick-fil-A’s corporate giving has been mischaracterized. And while our sincere intent has been to remain out of this political and social debate, events from Chicago this week have once again resulted in questions around our giving. For that reason, we want to provide some context and clarity around who we are, what we believe and our priorities in relation to corporate giving.

A part of our corporate commitment is to be responsible stewards of all that God has entrusted to us. Because of this commitment, Chick-fil-A’s giving heritage is focused on programs that educate youth, strengthen families and enrich marriages, and support communities. We will continue to focus our giving in those areas. Our intent is not to support political or social agendas.

As we have stated, the Chick-fil-A culture and service tradition in our restaurants is to treat every person with honor, dignity and respect – regardless of their belief, race, creed, sexual orientation or gender. We will continue this tradition in the over 1,600 restaurants run by independent Owner/Operators.

UPDATE: Just to be absolutely clear, conservative pundit Mike Huckabee, who started the whole Eat at Chick-fil-A Day movement in July, reached out to the chicken chain and its president on Friday for an even more precise statement posted to Huckabee’s website, according to Politico.

“There continues to be erroneous implications in the media that Chick-fil-A changed our practices and priorities in order to obtain permission for a new restaurant in Chicago. That is incorrect,” the fast-food chain’s statement read, according to the former Arkansas governor. “Chick-fil-A made no such concessions, and we remain true to who we are and who we have been.”

Huckabee noted on his website that he “talked earlier today personally with Dan Cathy, CEO of Chick Fil-A about the new reports that Chick Fil-A had capitulated to demands of the supporters of same sex marriage. This is not true. The company continues to focus on the fair treatment of all of its customers and employees, but to end confusion gave me this statement.”

WinShape Ride for the Family bikers locked and loaded for 200 mile ride to Wilmington out of Charleston. twitter.com/dancathy/statu…