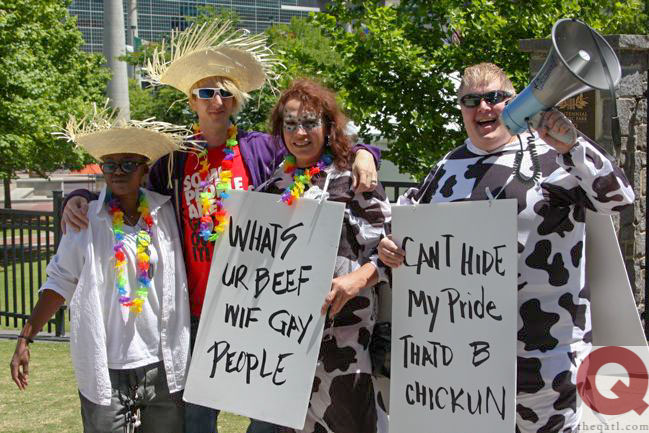 But the company reiterated that it's distancing itself – and curtailing donations – to an anti-LGBTQ youth home in Vidalia, Ga.

The Paul Anderson Youth Home called homosexuality an evil that is caused by the abuse of children. They have also taught boys that same-sex marriage is “rage against Jesus Christ and His values.” The organization’s views on LGBTQ issues now appear to be scrubbed from its website.

“In 2017, a decision was made by the Chick-fil-A Foundation to no longer donate to the group after a blog post from 2010 surfaced that does not meet Chick-fil-A’s commitment to creating a welcoming environment to all.”

The company’s 2018 tax filings are unavailable.

The company told Think Progress that it gives to FCA to support its summer sports camps and it gives to the Salvation Army to support various children’s programs.

“[S]ince the Chick-fil-A Foundation was created in 2012, our giving has always focused on youth and education,” the company said. “We have never donated with the purpose of supporting a social or political agenda. There are 140,000 people — black, white; gay, straight; Christian, non-Christian — who represent Chick-fil-A. We are the sum of many experiences, but what we all have in common is a commitment to providing great food, genuine hospitality, and a welcoming environment to all of our guests.”

A day after the Think Progress report, the San Antonio City Council voted to ban Chick-fil-A from the city's aiport, citing the company's “legacy of anti-LGBTQ behavior.”

Chick-fil-A CEO Dan Cathy was the keynote speaker at an Atlanta conference in 2018 focused on equality despite his vocal opposition to marriage equality and the company’s record of pumping millions of dollars into anti-LGBTQ groups.