Chick-fil-A hits back against those gay Muppets 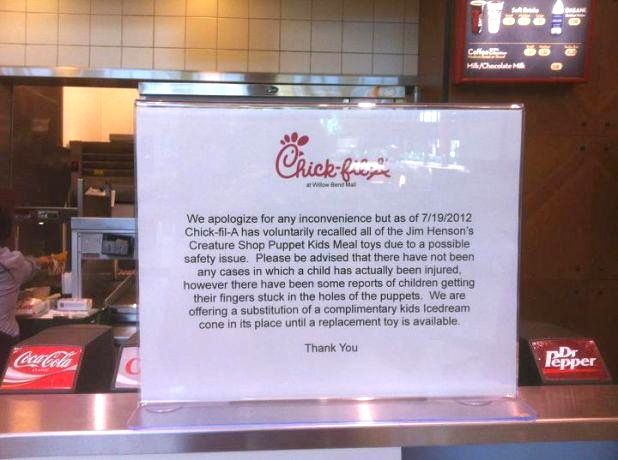 When Kim Zolciak, the gays and even the Muppets are disgusted with you, it’s time for a little introspection. Not for Chick-fil-A. The Atlanta company first took aim at the gays and now, it’s targeting the gay-friendly Muppets. Chick-fil-A’s growing public relations mess could grow even worse early next month. That’s when gay foes and religious supporters square off in its restaurants across the country for dueling days of activism. And this certainly won’t help to tamp down the controversy since the company came out of the closet as hating “arrogant” gay activists: The company is dumping Jim Henson’s Creature Shop Puppet Kids Meal toys. Chick-fil-A says it’s recalling the toys over safety concerns (photo). But the move comes a day after the Muppets told the chicken chain to take a hike over its anti-gay views. The continuing fallout isn’t likely to help the company, says gay Atlanta PR executive Mark Pettit. The president and CEO of Creaxion called out the company in an essay for the Huffington Post.

I will no longer eat at Chick-fil-A -- that is, until Mr. Cathy publicly apologizes. And he needs to do it soon. Mr. Cathy needs to understand that while his company is privately held, it is publicly supported. Thousands of gay people work and eat at Chick-fil-A every day -- many of them with a bit of shame knowing that they love the company but don't like what senior executives apparently stand for. That will change quickly.

The controversy flared up – Chick-fil-A’s giving to anti-gay groups is nothing new – and enraged activists on both sides. Now clicktivists, social media and calls for action are taking over. On the gay side, there’s the National Same Sex Kiss Day at Chick-fil-A set for Aug. 3. On the wrong side is Mike Huckabee and Chick-fil-A Appreciation Day on Aug. 1. The former GOP presidential candidate and current radio host pitches the day as an effort to affirm support for the company’s “Christian principles and whose executives are wiling to take a stand for the Godly values we espouse.” (Huckabee said Tuesday the Facebook invitation for the event has been removed from the site but it’s still happening.) So this controversy isn’t likely to pass quickly. Newsweek is seeking current or former Chick-fil-A employees to dish about the company. But just the gay ones. UPDATE: Huckabee's Facebook invite for Chick-fil-A Appreciation Day is again appearing on Facebook. Nearly 103,000 people have responded saying they will attend, as of Wednesday morning. Photo courtesy Wipe Out Homophobia