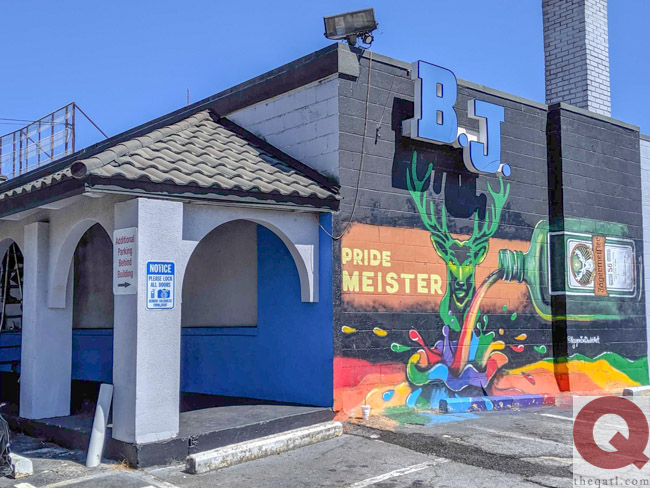 A new MARTA light rail station could replace two longtime Atlanta gay bars as part of a nearly $2 billion project, but it’s unclear when that would happen and if construction will ever begin.

The Clifton Corridor project would connect the Lindbergh Center MARTA Station to new stations on Cheshire Bridge Road and near Emory University and the Centers for Disease Control & Prevention, according to Saporta Report. The light rail line would parallel the CSX railroad, which runs along the southern border of property where BJ Roosters and Heretic sit (second photo).

The Cheshire Bridge MARTA station would replace BJ’s and Heretic at the intersection of Cheshire Bridge and Faulkner roads, according to a presentation MARTA officials delivered to residents in the Lindridge-Martin Manor, LaVista Park and Woodland Hills neighborhoods in June 2018 (see station rendering from presentation below).

But it will be years before the project begins, according to Heretic General Manager Alan Collins.

“From what I understand it’s going to be at least 10 years before they start acquiring any sort of property,” Collins told Project Q Atlanta.

BJ’s owner Bobby Hamill also said the project had been “pushed back” 10 years.

A project timeline presented to the planning committee of MARTA’s board in May shows construction on the Clifton Corridor project beginning in 2027 and being completed in 2037, according to the AJC. The committee approved the timeline. MARTA estimates the cost of the project at $1.8 billion to $2.1 billion.

That timeline could change, MARTA spokesperson Stephany Fisher told Project Q, as the environmental review of the project takes place and then the design phase.

“The project could include a new rail station on the southside of Cheshire Bridge Road,” she said. “That is just one of the options being evaluated during the environmental review process.”

BJ Roosters and Heretic will be part of the environmental review evaluation, “however, we cannot say with certainty that these two businesses will be affected,” Fisher said.

Collins isn’t too worried – yet.

“As far as I know, it’s business as usual and we’re not going anywhere until we have to,” he said.

Atlanta voters approved a half-cent sales tax in 2016 to pay for MARTA expansion across the city. The tax is expected to raise about $2.7 billion over 40 years, according to the AJC.

Original plans for the Clifton Corridor project extended the line east to Decatur and Avondale Estates, but those plans have been shelved, according to Saporta Report. The line is now projected to be four miles long.

LGBTQ nightlife on Cheshire Bridge Road has slowly eroded over the years. Eros and Jungle closed in 2017, New Covenant Church of Atlanta moved to southeast Atlanta in 2018 and Manifest closed in June. Manifest’s owners said the club would reopen in a new location within a few months of closing. Tokyo Valentino is in the midst of a long-running lawsuit filed by the City of Atlanta.

However, Selig Enterprises told Atlanta magazine that it has no plans to redevelop the Cheshire Bridge Road property where the Cheshire Motor Inn, the Colonnade and the gay-owned Antiques & Beyond now sit.