Cher vs. Elton: Divas square off over gay Russia 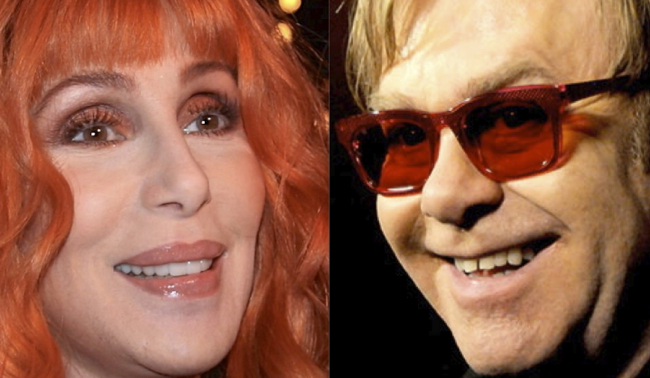 Move over, allies-come-lately. Gay icons Cher and Elton John will show you how to make a headline. Cher’s the latest to just say no to Russia, but Elton one-ups her, calls bullshit on that mess and gets an appearance fee to boot.

Like red ribbons in the '90s and anti-bullying videos last year, the latest celebrity ally must-have is a public rebuke of Russia and/or its perceived enabler, the International Olympic Committee over Sochi 2014. But Cher and Elton have been turning headlines into their own since before other would-be allies were born. Step aside, newbies. They got this.

While the U.N., lawmakers, leaders of the free world and gay bars hash out the big issues, athletes from gay ice skater Johnny Weir to all those hot straight jocks for equality have denounced the country’s gay law. Easy peasy. Not to be outdone, entertainers like newly out actor Wentworth Miller have told Russia to shove its requests to appear there.

Cool. Shame and shun. Done and done. But it takes a real expert to do both, throw in a shout-out to your LGBT fan base, and promote your latest project while looking amazing and being charming. That’s Cher. It takes an even bolder diva to do all that but go against the grain while maintaining that your payday is for the people. That’s Elton. Watch and learn.

With her millionth album in 50 years coming out next week, Cher sits down with multiple outlets, dishes on singing for Jackie Kennedy, gets a word in about identifying with gay fans for being an outcast, and throws a publicity bone to her charming transgender son Chaz Bono. All while looking smooth as a baby’s butt, and all in a day’s work. LGB and T. Check! What’s that? Oh, she was invited to open the Olympics in Sochi and turned that shit down cold.

“I can’t name names but my friend called who is a big oligarch over there, and asked me if I’d like to be an ambassador for the Olympics and open the show. I immediately said no. I want to know why all of this gay hate just exploded over there. He said the Russian people don’t feel the way the government does.”

But Elton sees that tactic and raises her one. He’s all about a headline gleaned from being contrary – embracing Eminem for a televised duet while the rapper was under fire for anti-gay lyrics, threatening a famously fawning foreign press, serving wedding singer realness anti-gay Rush Limbaugh, and dissing Madonna's Golden Globe, to name a few.

Boycotting Russia right before setting off on a tour? Oh no. The people need Elton. With a husband and baby to feed, the former top of the part-time gay Atlanta resident foodchain offers his thoughts as a gay man, on sex in the '70s, on coming out, and on being shunned internationally. That publicity Madonna and Lady Gaga enjoyed for titillating Russian stages with their gay-friendliness before the anti-gay law was nationwide? Sir Elton will have what they’re having.

“I'm supposed to be going to Moscow in December,” he says. “I've got to go. And I've got to think about what I'm going to say very carefully. There's two avenues of thought: do you stop everyone going, ban all the artists coming in from Russia? But then you're really leaving the men and women who are gay and suffering under the anti-gay laws in an isolated situation. As a gay man, I can't leave those people on their own without going over there and supporting them. I don't know what's going to happen, but I've got to go.”

Let’s take him at his word about his motivation, but don’t forget that he was already contractually obligated to be there. And he’s not turning down the pay day or earmarking those funds for human rights in Russia. God knows he could afford it, so from our site to God's ears.

More on Russia from Hollywood? Be sure it will come, but rest assured as we hear from the rest that it’s now been done by the best.