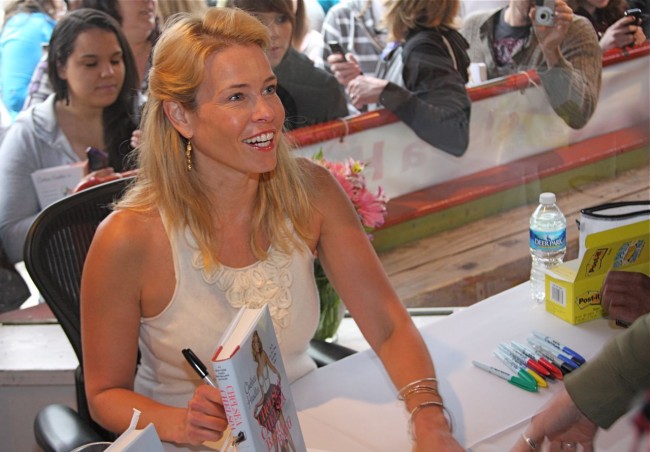 Comedian and TV talk show gabber Chelsea Handler wanted to experience Atlanta’s gay nightlife up close and personal on Thursday. So of course she hit a gay strip club for a little nekkid fun. Star-spotting fans took to Facebook late Thursday to report that the “Chelsea Lately” host was enjoying some manflesh at Bliss Atlanta. Even the club’s manager couldn’t resist. But no photos of her adult fun have surfaced and Handler wasn’t talking about the trip on social media, either. But it’s not the first swing through gay Atlanta for Handler. She hit the now-defunct Outwrite Bookstore in July 2011 and in March 2010 (photo) to pitch her books. It’s also not the first time a celeb has warmed up to strippers in an Atlanta club. Actor Leslie Jordan loves to brag about making it rain at Swinging Richards when he’s in town. And gay rocker Adam Lambert hit the Pink Pony during a 2010 stop here that also included cocktails at Blake’s. Lady Gaga? She prefers hanging out with the gays at Sister Louisa's Church.