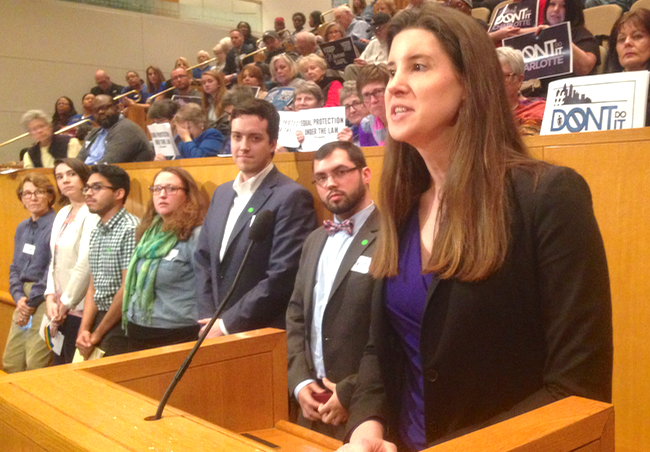 Charlotte’s city council voted 7-4 on Monday to expand local non-discrimination protections to include sexual orientation and gender identity, among other characteristics.

The move, which brings Charlotte in line with nearly all major U.S. cities, came after more than a year-and-a-half of debate and lobbying and a failed council vote almost a year ago. In March 2015, a public comment period lasted more than six hours, including anti-gay preachers singing barnyard songs and high-profile anti-LGBT leaders warning the city of legal trouble.

On Monday, a shorter public comment period saw much of the same heated rhetoric, though speakers were given only one minute to address council. While anti-gay barnyard songs seemed to disappear, a satirical, anti-gay “King John,” who “self-identified” as “gender royal” unwittingly spawned a brief social media meme quickly picked up by LGBT activists, even poking fun at Tami Fitzgerald, executive director of the NC Values Coalition and one of the leading opponents of Charlotte’s new non-discrimination protections.

“King” John Kirwin performing a bit of satire at the Charlotte City Council meeting, comparing #transgender individuals with those wishing to identify as genderroyal. He speaks over his time and is nearly thrown out. The ordinance, offering #LGBT protections, passed 7-4: https://goqnotes.com/42016/city-council-votes-7-4-to-add-lgbt-protections-to-charlotte-non-discrimination-ordinance/#genderroyal #cltequality

The public comment period saw nearly 140 speakers in favor and opposed to the ordinance. Of those, about 51 spoke in favor of the new changes with most opposition coming from those who live in Charlotte’s suburbs.

The bathroom fears were picked up by Republican Councilmember Ed Driggs, who voted against the ordinances.

“What troubles me most about this whole conversation is the way we’ve been put on the defensive,” Driggs said when it came time to debate the motion. “There is absolutely no accommodation in here for all the people we heard from tonight who object to this.”

Driggs also didn’t see any value in the testimony of transgender people who have experienced harassment and abuse. 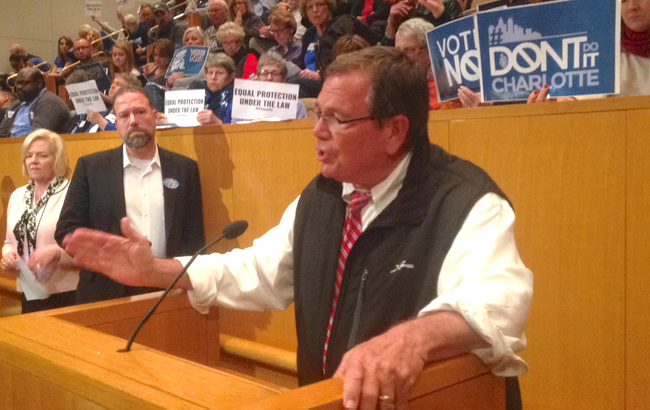 Proponents of the new ordinances, including the Mecklenburg LGBT Political Action Committee (MeckPAC), Equality North Carolina and the Human Rights Campaign, largely avoided speaking about restrooms. But others addressed the issues head on.

Juli Ghazi, who owns the Pure Pizza restaurant, used her one-minute to speak from her experience as a business owner. Late last year, she made one of her restrooms entirely gender neutral.

“I can speak to you from experience not fear,” Ghazi said. “I’m here to tell you what that restroom is not. It’s not a place where perverts are drilling holes into the stalls next to them. … There’s not been any gay or straight sex initiated in the bathroom. … There’s been no deviant behavior of any kind.”

Some of the most powerful comments came from local transgender residents.

Rev. Debra Hopkins of Sacred Souls Community Church told the council that she deserves to have non-discrimination laws which protect her.

One of the most powerful transgender voices for equality on Monday night was the Rev. Debra Hopkins.

Local transgender leader Paige Dula also had powerful words on Monday. For some, perhaps, hard to hear, but the words she read came directly from opponents of the ordinance and those with violence on their minds. It was important for the City Council and the public to hear.

The final vote came after each member of council and Mayor Jennifer Roberts addressed the topic.

Al Austin, one of two openly gay city council members, said opponents had spread “misinformation, half truths and all out lies.”

“The world is watching Charlotte, N.C, my hometown; this time it is not for Panthers football, but it’s really what type of world-class, global city we’ve become,” Austin said. “The question is are we a diverse city that is inclusive of all races, genders, religions, thoughts, perspectives and orientations? Are we a city that celebrates diversity and realizes we are stronger together?”

Austin added, “Or are we a city that panders to fear and hate by those who wish to perpetuate injustice, discrimination, prejudice and inequality? I say to you, ‘Not on my watch.’”

Councilmember Julie Eiselt didn’t appear in chamber until about 8:30 p.m., arriving late after nursing a severe cold at home all day.

Eiselt lashed out at anti-LGBT opponents during her remarks, clearly tired and aggravated when the motion was made near 10 p.m.

“If this was a church tonight, I would never come back,” Eiselt said.

When the vote was finally counted, seven hands went up in favor, including Austin and Eiselt, along with Councilmembers John Autry, Patsy Kinsey, Vi Lyles, LaWana Mayfield, who is gay, and James Mitchell. Four opposed, including Republicans Driggs and Kenny Smith, along with Democrats Claire Fallon and Greg Phipps.

The moment was met with an explosion of applause from residents in the council chamber.

The LGBT-inclusive ordinances came as supporters plotted a new strategy for passage and worked to ease tensions during a public meeting on Feb. 1. Charlotte becomes the first city to pass the ordinances in the wake of others trying and failing. A similar measure in Houston was defeated after a court fight that forced a public vote in November. In Jacksonville, a city council member advocating for a Human Rights Ordinance withdrew the proposal this month.

The ordinances in Charlotte will go into effect on April 1. The move on Monday adds marital status, family status, sexual orientation and gender identity and expression to the city’s current non-discrimination ordinances impacting restaurants, hotels, bars, taxis and other public accommodations.

But it’s likely to face “immediate action” from the Republican-controlled state legislature, a promise Gov. Pat McCrory made in an email to Driggs and Smith in the lead up to Monday’s vote.

The state legislature last year attempted to pre-empt local non-discrimination ordinances. That bill could come back up for a vote, or state lawmakers could place the matter on a public referendum.

LGBT leaders say they’re ready for that fight and have already condemned what they say is state overreach into local affairs.

“In Equality NC’s 37-year history, we have repeatedly seen a handful of extremists in Raleigh attempt to abolish local control through power grabs that would restrict local governments from controlling infrastructure, transportation, local election districts, or even non-discrimination laws,” a statement from the group read in response to McCrory’s letter. “We remain resolved to work with leaders in Charlotte who are ready to do the right thing and are confident that fair minded legislators will agree that protecting LGBT residents from discrimination is in the best interest of Charlotte.”