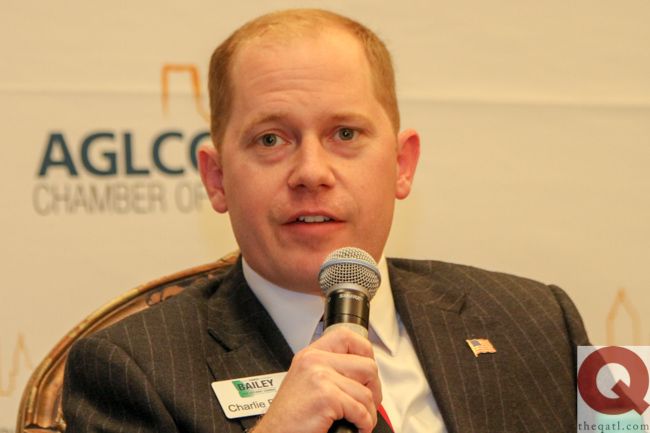 Georgia Attorney General candidate Charlie Bailey traces his opposition to anti-LGBTQ “religious freedom” bills back to the African-American civil rights movement of the 1950s and ‘60s.

It’s an issue that hits close to home for Bailey, whose great uncle was Randolph W. Thrower, the late attorney who provided legal support for the Civil Rights Movement. As IRS chief under President Richard Nixon, Thrower overturned a ruling that granted tax exemptions to segregated private schools in the South.

Bailey, 35, said growing up that he didn’t realize the impact Thrower had on law and ethics.

“[Thrower] would talk about how you can improve peoples’ day-to-day lives, how lawyers can use the law to really help people, and that it’s a very powerful thing and can be a very influential thing in society,” Bailey said. “And that appealed to me. That’s what made me decide I wanted to go to law school.”

Bailey studied religion and political science at the University of Georgia before entering law school there. And his faith is another reason he opposes “religious freedom” bills.

“Listen, I majored in religion. I’ve given a sermon in the United Methodist Church. I’m not going to take lectures from anybody on religion,” he said. “Faith is very important to me, but our faith cannot be a guise for discrimination. That’s not in line with my personal faith, but it’s also not what this country is about.”

'It is a moral question'

Bailey made clear during a recent Atlanta Gay & Lesbian Chamber of Commerce business forum that if a “religious freedom” bill becomes law and is later challenged in court, he will refuse to defend it as attorney general. He also said he would weigh in from his office with legal opinions against discriminatory legislation that is signed into law.

The Democrat faces Republican incumbent Chris Carr, who in April joined a group of 17 state attorneys general in a letter to the U.S. Department of Health & Human Services voicing support for “religious freedom” rights.

Carr also ignored calls by LGBTQ groups who asked the state to drop out of a lawsuit challenging federal guidelines on the treatment of transgender students. President Trump later reversed those guidelines.

Carr’s office also represents Georgia Regional Hospital in the case of Jameka Evans, who sued the hospital in 2015 alleging that supervisors there fired her for being a lesbian. The U.S. Supreme Court refused to hear her case in December, and Carr filed a motion to dismiss the case in the U.S. District Court for the Southern District in January.

Bailey said Carr’s focus on issues including “religious freedom” is a distraction.

“While he’s doing those things, he’s not focusing on the things that are his job, which is you’re supposed to be the top prosecutor in the state,” Bailey said.

“My opponent goes around trying to parrot these talking points and say, ‘We’re the best state to do business in the country’ and all this kind of thing. Well, we won’t be if the things that he’s pushing get made law,” he added.

Bailey’s argument against “religious freedom” bills goes beyond a legal and economic one.

“We don’t get to determine how much time we have on this Earth, but we do get to determine what we do with that time,” he said. “And if you’re going to stand up and put yourself forward and say you want to be a leader in this state, I think you gotta lead on those moral questions. And it is a moral question.

“When you do unto others as you would have done onto you, that wasn’t a talking point out of D.C. It was about human decency and how we treat our brothers and sisters. So yes, it is moral to me and it is personal as well,” he added.

Georgia Stonewall Democrats endorsed Bailey. Georgia Equality hasn't issued an endorsement in the race, but will announce a new round of endorsements in late August or early September.