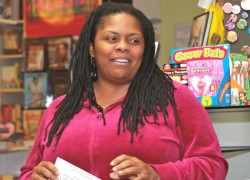 Owners and supporters of Charis Books & More unveiled plans on Wednesday to uproot the feminist icon from its longtime home in Little Five Points and transform it into a feminist center with the help of a capital campaign that could reach $1 million.

The year-long, complicated transition to create the Charis Feminist Center will involve dozens of volunteers across a handful of committees to raise funds, plan programming, secure a new facility and communicate throughout the process with key constituencies that have supported the bookstore and its affiliated non-profit, Charis Circle, for more than 36 years, including rescuing it from near extinction in 2005.

“It means that we are gong to leave Little Five Points,” Angela Brown (top photo), the executive director of Chairs Circle, said during the unveiling at the store Wednesday night. “We love the community we are sitting in, but as you can look around we have outgrown it.” 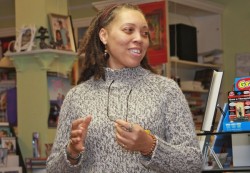 Here are five things you should know about plans to create the Charis Feminist Center.

The key is a new facility. The store and non-profit, tucked into a converted home on Euclid Avenue, hampers their operation. The facility lacks adequate parking, and holding programming during the store’s operating hours is nearly impossible, says Elizabeth Anderson, Charis Circle’s programming director. “Currently, we have to move bookshelves when we do programs. There is just not the space. As we look to building a feminist center, we want to be able to do daytime programming,” she says. 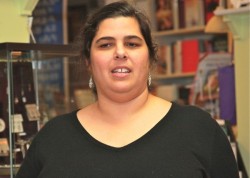 Where will Charis go? Plans call for selling the current store, and efforts are already underway with local Realtors to find a suitable space. They are scouting out closed grocery stores and other large retails spaces that offer a storefront – the bookstore remains an integral piece of the new center – and space to offer new services, such as a coffee shop, meeting space, playground, archive and maybe even a movie theater, Anderson says. They want to stay intown and near a MARTA rail line. “We are dreaming big right now because we can, and then we will see what we can do,” she says. “We are throwing around a lot of stuff now. We are opening everything up and allowing the community to dedicate where they want to see us go.”

The transition. The store’s owners and the non-profit’s board have been hatching plans for the feminist center for more than three months. They envision completing the move into a new center within a year, says board chair Kelley Alexander (second photo). Six teams of up to 15 members each will work on the project. “This will be a community led effort to create the center. We want everyone involved in creating the center,” Alexander says. “It is ambitious but we are very committed.” 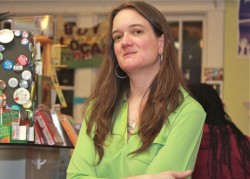 Will it compete with the Rush Center? Charis officials are quick to point out that the creation of their feminist center complements – not competes – with the Rush Center, the burgeoning collection of LGBT non-profits on DeKalb Avenue named for longtime LGBT and community activist Phillip Rush, who died in 2010. The Rush Center recently expanded, adding office space for even more gay non-profits. “We want to make sure that everybody at the Rush Center sees us as an added space and a bonus and not in competition,” Anderson says. “We still provide a community resource that no one else does. What makes us different, in part, is that the Rush Center doesn’t have a space where you can hang out without a purpose.”

Why now? Mired in an economic recession and just weeks past the collapse of bookstore chain Borders, supporters on Wednesday questioned why launch this transition now. Sara Look (bottom photo), who co-owns the store with Angela Gabriel (third photo), offered a simple answer: “We have a treasured resource in Atlanta and we want to stay strong and vibrant and we have to embrace change to do that,” she says.