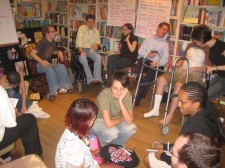 A “revolution” at the feminist non-profit Charis Circle includes the departure of both co-directors and venerable Charis Founder Linda Bryant, as well as an earnest, immediate search for an executive director.

Charis Circle is in charge of the community-based programming that takes place mostly at its affiliated lesbian-owned bookstore Charis Books & More. The group is responsible for multiple guest appearances throughout the year, as well as regularly scheduled workshops (top photo) that include the popular Faiths & Feminisms discussion group, Cliterati Open No-Mic Nights, and the Queer Literary Fiction group, to name a few.

In an e-mail sent Wednesday to Charis subscribers, the 35-year old lesbian-feminist organization announced the exit of co-directors Kerrie Lynn and Kelley Alexander along with Bryant. It characterized the transition as “a unique moment of growth and revolution” with the newly created executive director position.

“It was an organizational decision,” Board Chair Dream Gomez tells Project Q Atlanta, citing both financial and personal reasons for the staff changes. “Charis Circle and the bookstore have been so intertwined, and we want to do a little bit more differentiation and focus on the Circle’s mission.”

The group’s stated mission is to “foster sustainable feminist communities, work for social justice, and encourage the expression of diverse and marginalized voices,” according to its website. Gomez says that the efforts of the Circle also extend directly to supporting the bookstore, and that Circle programming allows Charis Books & More to remain open seven days a week. Read what bookstore co-owner Sara Look had to say recently when asked about the community benefits Atlanta enjoys with two LGBT-run booksellers.

“There’s something so special about that place, beyond just books,” Gomez says. “We need to make sure that space is there for the community for a long time to come.”

Lynn started as Marketing and Programming Director and quickly became “the face” of Charis Circle, Gomez says. If you called or e-mailed Charis Circle in recent years, you most likely dealt with her.

“We were able to get to a certain level with the work that Kerrie did, and it was invaluable,” Gomez says. “Then about a year ago, we decided to try the co-directorship when Kelley came in with great strategic planning.”

Lynn won’t actively participate with Charis Circle, Gomez says, but “is a vibrant member of the community and will always be a part of the Charis family.” Alexander “will transition to the board at some point.” Writing Programs Director Elizabeth Anderson remains on staff at Charis Circle.

The bookstore staff, including its ownership, won’t change as a result of the reorganization.

“We’re trying to focus what [Lynn and Alexander] were doing even more,” Gomez adds. “Now we’re conducting this search for a power player in the executive director position.”

The list of qualifications for the job would start with a view of the world through a feminist lens and continue with what Gomez calls a “jack of all trades when it comes to fundraising and team building, all the way from bigger-picture stuff down to all the administrative stuff.” Read details about the opening for an interim executive director as the search for a permanent one gets underway.

“We’re really so consensus based and having input from the community come into all aspects of our programming,” she says. “So we need someone to facilitate that and establish a direction, then be a great team builder so we can add people and spread out the work.”

Bryant (bottom photo) co-founded both Charis Circle and Charis Books & More in 1974 and left her co-ownership of the bookstore several years ago. She knew the reorganization was the right time to take another step back, she says.

“I am in my 60s now and still wanting to follow where I’m led by the ‘still small voice’ within,” Bryant says. “That voice tells me that there is other work for me to do now, to be open, to continue to seek guidance, to continue to find ways to serve.”

The founder also says she still feels “deep, abiding connections to Charis and will continue to be involved in more peripheral ways,” which include working at the bookstore some Saturdays “to stay close to books and to community.”

Bryant says she is comfortable with passing the torch and happy with the Charis legacy she helped create.

“The Charis 35th anniversary celebrations were a wonderful way for me to look out and see what Charis has become and perhaps to glimpse what it is becoming. I am grateful to the amazing folks in whose hands Charis rests—Sara and Angela at the bookstore, the board and Elizabeth at the Circle—and the whole community who has shaped and supported Charis since the beginning.

“I am proud of what we’ve done together, eager to see what transformations will now emerge, and more grateful than I can say for all of us to still have a bookstore, a place, and ways to grow and be challenged and comforted as we continue on in our work for a better world.

“I hope that many, many people who care about Charis will be inspired to be more involved in the continuing development of our space, our work, and our reality here in Atlanta.”