Changing of the gay guard at Radial Café 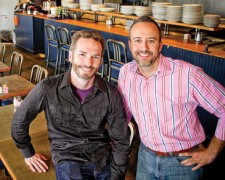 A mainstay for early risers and late lunchers, Radial Café recently changed hands from one popular gay owner to another. It’s a transition for which former owner Philip Palmer says Frank Bragg is a “perfect fit.”

“He’s got a connection to the community and cares about the world around him,” says Palmer (photo, left). “It’ll be exciting to see what he accomplishes in the next few years. I think he is uniquely qualified to grow Radial.”

He went on to Metrotainment’s area manager and moved into marketing and training before leaving the company in February. He says that since then, he was looking for an opportunity like Radial.

“When Phil decided to sell, the more I looked at purchasing it, the better an idea it became,” Bragg says. “I hope people think of me and think great hospitality and incredible food.”

Radial started as a sandwich and breakfast diner, and during 11 years under Palmer’s watchful eye evolved to serve more sophisticated meals to a diverse clientele. In 2006, he expanded the space two-fold to seat some 120 diners. He also made Radial the first restaurant in Georgia to be officially rated “green” by reducing its ecological footprint in service materials, disposal systems and water usage.

That’s a legacy the new owner is committed to continue.

“My goal is to enhance what’s already there,” Bragg says. “There’s an award-winning breakfast already in place. I have big shoes to fill, and I’m looking to expand our selections, buy even more locally, feature more organic products, and possibly add solar panels to move even further toward being friendly to the environment. I want to take the restaurant’s reputation and build on it.”

Bragg—who has won awards from Georgia Equality, HRC, the Atlanta Gay Men’s Chorus, and the National Restaurant Association’s Good Neighbor Award to name a few—also looks to build on the restaurant’s and his own reputation for community involvement and what he calls an “eco-preneurial” spirit.

“Radial’s commitment to community and ecology is there, and I intend to take that commitment very seriously,” he says. “My only goal is to continue to grow the concept.”

To the joy of brunch aficionados, it looks like Radial will keep its well-earned spot among Atlanta’s gay-owned breakfast and brunch eateries.

Be sure to also mark your brunch calendars for gay-owned eateries like Ria’s Bluebird and Las Margaritas, as well as weekend specials at bar kitchens including Blake’s, Woofs and the latest addition Nawlins Restaurant at My Sisters’ Room, which serves a special Gay Thanksgiving Dinner on Thursday. This week, the monthly touring Big Gay Supper Club goes from dinner to brunch on Saturday at South City Kitchen.