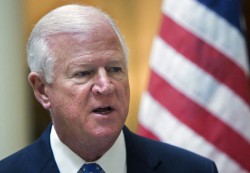 Sen. Saxby Chambliss, an anti-gay Republican from Georgia, on Thursday announced action against a staffer who threatened gays with death, but it all depends on your definition of “removed.” Chambliss released a statement announcing the removal of the staffer, but stopped short of naming the person or clarifying whether the person was fired or reassigned. The action came nine days after the staffer posted “all faggots must die” to a gay blog as Chambliss and other Republicans in the Senate beat back an effort to repeal the military’s ban on openly gay soldiers. The statement from Chambliss:

“The office of the Senate Sergeant at Arms has concluded its investigation, and I responded to that report immediately with the removal of a member of my staff. I commend the Sergeant at Arms, Terrance Gainer, and his staff for their very thorough and professional work. “I have called Mr. Jervis, the blog’s author, and apologized to him personally, and I am sorry for the hurt this incident has caused. Regardless of one’s position on issues and policies, such comments are simply unacceptable, are not befitting those who work in the U.S. Senate, and I will not tolerate them from my staff.”

Joseph Jervis, author of Joe. My. God. where the comment was posted, says he told Chambliss during the call that he would accept the apology if it was made public.

"Thank you, Senator. I do appreciate the call and I do accept your apology on the condition that your office issues a public statement repeating what you've just said to me. I'd also like the disposition of your staffer's job status to be made public."

Jervis told the Atlanta Journal-Constitution that he now considers the matter closed.

“I consider the matter closed. The gentleman is no longer in Chambliss’ office,” he said. “I’m pretty sure if he were a direct Chambliss hire, we would know his name. I don’t think he was Chambliss’ to fire. I was never calling for this guy’s head. I just wanted the senator himself to address the issue and say that this can’t happen in my office. He has done that.”

The action by Chambliss comes a day after members of the Queer Justice League met with staffers for the senator in his Atlanta office. The group demanded a public apology and sensitivity training for his employees. On Sept. 22, Chambliss issued a statement confirming that the blog comment came from his Atlanta office. But he declined to take action against any staff members that work there, instead deflecting the issue to the Senate sergeant at arms.