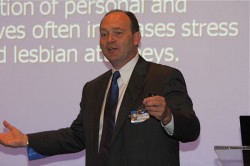 Among cocktails, snacks and a boisterous gathering in the next room, LGBT business folks gathered on Wednesday to talk about traversing being openly gay in corporate America.

The cocktailing and panel discussion came courtesy of the Atlanta Gay & Lesbian Chamber of Commerce, which returned its quarterly WOW Wednesday program to the upscale Hotel Palomar in Midtown. The gay business group held its WOW Wednesday at the hotel on Feb. 17, too, when the discussion focused how businesses can better their score on the Corporate Equality Index, the publication from the Human Rights Campaign that ranks firms on their treatment of LGBT employees, consumers and investors. 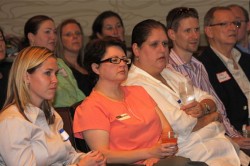 On Wednesday, the discussion focused on navigating being gay in big business. The evening opened with guest speaker Larry Smith, an Orlando attorney who founded Southern Trial Counsel. Smith, who focuses on the defense of complex and high-exposure cases for large businesses, was the first openly gay member of the Florida Supreme Court Commission on Professionalism and the first openly gay attorney to chair its diversity subcommittee. He is also a charter member of the Florida Bar’s Equal Opportunities Section.

Smith’s talk was followed by a panel discussion that included Nadia Morris, a transgender board member of AT&T’s gay employee group; Geoffrey Bieger from Deloitte; and Renee Weese, a lesbian who owns Minerva Planning Group.

The gay chamber is planning for its Community Awards Dinner on Aug. 20 at the W Atlanta Midtown. The group is accepting nominations for Businesswoman of the Year, Businessman of the Year, Member of the Year, Corporate Ally and Guardian Angel (non-profit).