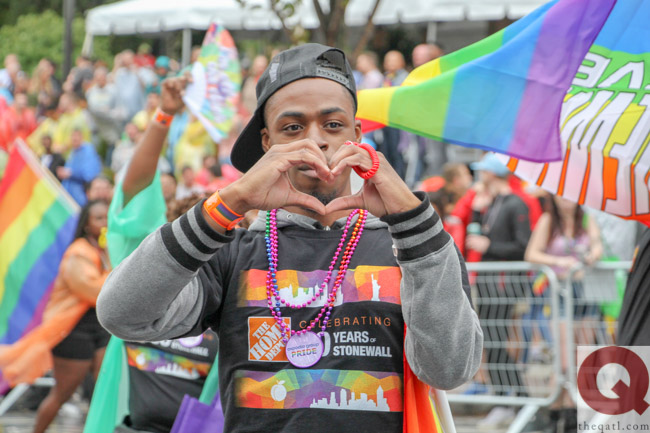 The Atlanta Pride parade – with more than 320 entries and thousands of people – sashayed its way through Midtown on Sunday not letting a steady drizzle dampen the hours of rainbow revelry.

The event opened with Dykes on Bikes gunning their engines to drown out the vulgar taunts of anti-LGBTQ protesters stationed at their usual spot at the intersection of Peachtree and 10th streets. Atlanta police also deployed new tactics for the protesters, who have in recent years grown more rowdy and disruptive. They boxed them in with several police cars and — similar to last year – stationed several officers nearby to separate the protesters from members of Pansy Patrol and parade participants who tried to confront them.

Dozens of elected officials and political candidates – about 40 in fact – joined the scores of brands, non-profits and businesses in the parade. The most high-profile included Stacey Abrams, the former Democratic candidate for governor, U.S. Rep. John Lewis and Mayor Keisha Lance Bottoms. They are rolled right over those controversial rainbow crosswalks.

Other parade participants included Gerald Bostock, who just five days earlier sat in the U.S. Supreme Court as attorneys argued over whether federal law should protect him from being fired by Clayton County for being gay. Gwinnett school board member Everton Blair marched with Gwinnett Democrats just two days after publicly coming out. Bishop Kevin Strickland also participated, just a week after being installed as the head of the Southeastern Synod of the  Evangelical Lutheran Church in America. Gene Robinson, who became the first openly gay Episcopal bishop in 2004, also took part. So did 12 grand marshals.

Bottoms kicked off Pride on Thursday with a public reception at LGBTQ-owned Flourish in Buckhead. On Friday, Pride-goers packed the sold-out annual party at the Georgia Aquarium.