RuPaul, one of gay Atlanta’s favorite sons, is in town tonight for a benefit performance at Primal. To get you in the mood for the diva, I’ve compiled a look at some of the most fabulous moments in RuPaul’s career. 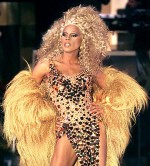 10. “Brady Bunch” movies
Mrs. Cummings, Jan’s guidance counselor, doles out innuendo and good advice about being oneself while rocking an enormous afro in the 1995 film and the sequel from 1996.

9. Duet with Elton John on “Don’t Go Breaking My Heart”
One of the campiest songs and music videos in history, this gem from 1995 is often overlooked, but it’s still puts a spring in your step and an extra sashay in your walk. (The fact that I had the cassette maxi-single with all of the remixes also should have been a huge sign I was gay.)

8. “To Wong Foo, Thanks for Everything! Julie Newmar”
1995 also found Ru on the big screen as Rachel Tensions, who descended from on high clad in a sequined, rebel flag evening gown to crown Noxeema Jackson and Vida Boheme as the winners of the New York Miss Drag America Pageant.

7. “Ho Ho Ho”
Released in 1995, this Christmas album is sometimes irreverent but always fun. Many people are surprised at how much they enjoy some of the songs on this one.

5. “Workout”
Taken from 2004’s “Red Hot,” this track combines high-energy dance with a killer dance break to create one of the gayest dance single ever, and that’s saying something.

4. “RuPaul’s Drag Race”
Last year’s hit series on Logo put Ru in living rooms once again on a weekly basis and gave us the uber-gay dismissal we’ve been waiting for: “Sashay away.”

3. Duet with Martha Wash on “It’s Raining Men – the Sequel”
Here’s the intro to the track:
Ru: “This is RuPaul.”
Martha: “And this is Martha Wash, reporting to you live from our weather center.”
Ru: “Honey, the stuff done got heavy.”
Martha: “Just when you thought it was safe to go back outside …”
Both: “BAM! The sequel!”
And the song just gets better from there.

2. “The RuPaul Show”
Pick any episode of this landmark talk-show on VH1 from the 90s and you can see Ru at her best. From campy skits to hilarious interviews with celebrity guests, Ru ruled.

1. “Supermodel (You Better Work)”
While Ru had been around for quite some time at this point, this track from 1993 is what landed her on the nation’s pop culture map. Ru commanded “You better work, bitch!” and a revolution began.