CDC’s HIV chief on awareness: Don’t be a whore 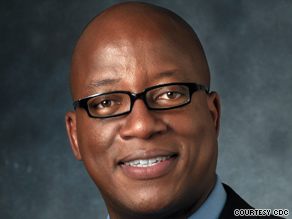 Dr. Kevin Fenton (photo), also known as the director of the Centers for Disease Control & Prevention’s National Center for HIV/AIDS, rallied for more attention and resources to combat HIV among blacks, especially gay ones, in a statement marking the HIV awareness day. Young black gay and bisexual men are most severely affected and have seen a nearly 50 percent spike in new HIV infections. (In Georgia, blacks are 30 percent of the population but represent 74 percent of all HIV cases, according to the state Department of Public Health.)

“We must also tackle factors such as homophobia and stigma – far too prevalent in many communities – that prevent too many in the black community from getting tested, and if HIV positive, from getting treated,’ Fenton says. “And we must speak out about HIV and begin to shed light on these issues that continue to hide in the dark.”

But Fenton saves his best advice for a video (top) in which he gets blunt about protecting yourself from HIV.

“Not having sex or being sexually active with only one person who has agreed to be sexually active only with you are some of the best ways to protect yourself from HIV,” Fenton says. “Using a condom consistently and correctly each time you have sex lowers your risk of getting HIV as well. Reducing the number of sexual partners also is very important.”

And then there’s this tip from Fenton, who offered it last year on National HIV Testing Day: Get yourself tested and know your status, whore or not.