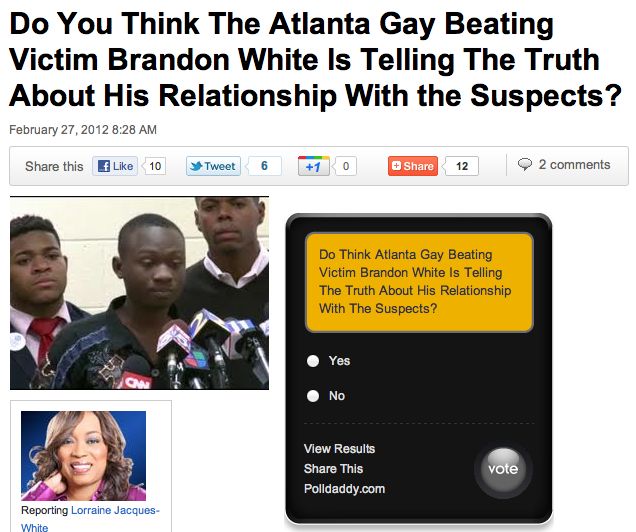 Douchebag attorney Jay Abt must be pretty proud of himself. He suckered a handful of LGBT activists into buying his pitch that a gay man provoked the beating his client is accused of delivering. Now, he’s got a CBS affiliate drinking his Kool-Aid.

Atlanta CBS Radio affiliates WAOK and CW69 have launched an online poll with this poorly-worded question: Do you think the Atlanta gay beating victim Brandon White is telling the truth about his relationship with the suspects?

It’s tasteless and hints at blaming the victim for the attack. A group of men — allegedly Dareal Demare Williams, Dorian Moragne and Christopher Deon Cain — attacked White on Feb. 4 as he left a grocery store in Southwest Atlanta. They beat him, repeatedly called him a “faggot,” recorded the incident and posted it online. During a Feb. 8 press conference, White said he didn’t know the men.

But since, CBS Atlanta was on hand last week as Abt and Moragne’s mother met with a handful of LGBT activists including Change Atlanta’s Devin Barrington-Ward and Terik Jackson, along with Gary Nichols. The men call White a liar, allege he knew the suspects and provoked the attack when he threatened to expose them for being gay.

Trouble is, there’s no proof. It’s like a circular firing squad. the CBS Radio affiliates offers none, instead relying on the accusations from the three activists. They, in turn, offer nothing more than information supplied by Abt and Moragne’s mother. One of the men apparently spoke to Abt, too. (White’s attorney, Christine Koehler called the accusations “false” and “reckless.)

Barrington-Ward, facing growing skepticism from LGBT critics about his role and impact on the case, has backed away and offered an apology to White.

Not so much for Jackson and Nichols. Guess they’re still drinking Kool-Aid from Abt, who’s having a good laugh at the easy time he’s had of undermining the criminal case and a possible federal hate crime prosecution.

UPDATE: An earlier version of this post incorrectly attributed the poll to TV station CBS Atlanta. The poll was posted by CBS Radio affiliates WAOK 1380, a radio station, and CW69, a cable TV station. The poll’s headline has also been revised and now reads, “WAOK Wants To Know If You Think Atlanta Gay Beating Victim Brandon White Is Telling The Truth About His Relationship With The Suspects?”