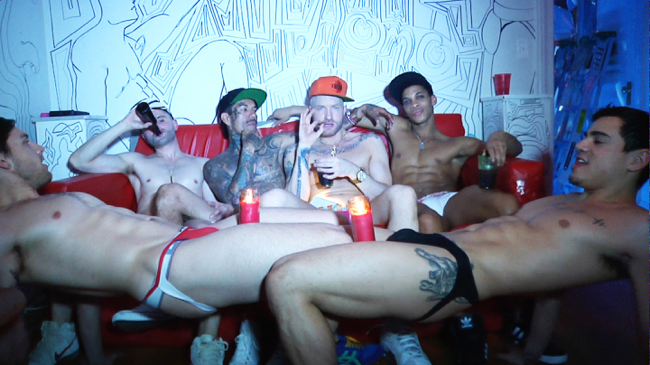 You met him at the ice cream truck. He told you about Beyoncé eating at Burger King. He’s been all over your face. Now Cazwell hits Atlanta to make you get down. To some sick beats, that is.

That’s right. The gay rapper behind those viral video hits and many more will be DJing and performing in Atlanta. He headlines the latest rendition of Bedlam’s WackedOutBlackOut party on Saturday at Jungle. The event, which also features performances from DJ King Atlas, Michael Robinson, Biqtch Puddin’ and J. Tyler, is a glow-in-the-dark body paint extravaganza that never dissapoints. Think of it as a live version of a Cazwell video, complete with clothing check.

What are you doing for WackedOutBlackOut?

I’m going to be DJing a really sick, ratchet hip-hop set – a lot of twerk, and a lot of trap, and a lot of “shake your ass, throw on the dance floor” beats. I think I’ll be performing too. I’m sure I’ll perform. I’m gonna perform from the DJ booth, but I’m going to perform some of my songs too.

This isn’t your first time down South. What have you come to expectin Atlanta?

The crowd is always crazy and energetic. The last time I played there was fun. It was a really good turnout. Everyone seems to have a really good energy, and they seem to have a good time in Atlanta. It’s a music-loving city, so if you’re playing music they can dance to, they tend to get down with you.

What do you like to do while you’re in town?

Besides getting ready for Atlanta, what else is going on in your life?

[Besides the video for “Downtown” in my apartment], I’m shooting a video in Long Island City for my song called “The Biscuit.” That video’s going to be out in May. And then I’m going to be doing my shows, touring, promoting the album and songs. So hopefully everybody likes those songs and videos.

And I’m also pushing my new underwear line that I’m doing with Geoffrey Mac, called Ice Cream Truck Underwear. That’s a big part of what I’m doing. And of course, my underwear’s making appearances in all the videos and stuff, and I’m trying to make sure that I have the underwear out and available for people to buy, in time for summertime.

Talk to us about your underwear. How did the new line come about?

Well, Geoffrey Mac wanted to do a project together, and he had just done a lot of leggings, tops and T-shirts with Sharon Needles that they designed together. At first, they wanted to do something like that with me; more like basketball shorts and tank tops. And I was like, “Let’s do one thing, focus on one type of garment.”

I always wanted to do underwear. That seemed really cool, like a no-brainer. At first I was gonna call it “Cazwell Underwear.” Then I got to doing more research about my demographic and who buys underwear.

I figured we’d call it “Ice Cream Truck Underwear” because I’m more associated with that video than any other video. And not only that, but calling it “Ice Cream Truck Underwear” gave us the opportunity to make a theme. So the inside of the waistbands have a waffle cone print, and we have some with sprinkles; we correlate the colors to different flavors. It’s more fun that way.

Thanks to your videos, plenty of people know who you are. Do you have people come up to you in random places to talk about your songs, or quoting lyrics?

Oh yeah, all the time. “Ice Cream Truck” is probably the most relatable – the one people bring up to me the most. I think that’s just fun. That video was kind of the first of its kind, and everyone who liked the video watched it 10 times. It seems to have some kind of effect on gay men, seeing men objectified like that. So yeah, people stop me, especially gay guys, regarding my music videos. Sometimes it’s that. A lot of times, it’s  “Rice and Beans” or “Get My Money Back.” Usually it’s the ones with the hot guys that they remember the most. (Laughs)

I’m still listening to the latest Azaelea Banks album. I’m listening to a lot of DJ mixes. I really like DJ Dawson, especially when he throws down hip-hop. I got the Madonna album – it’s alright. I like the new Diplo/Skrillex album. I also like listening to the oldies. I mix it up. I kinda like to put on Pandora, so I don’t know what the fuck I’m listening to. (Laughs)

So I’m just really looking forward to throwing a hot set that everybody can party their asses off to. I think it’s going to be a sickening party, so I want to invite everyone to come out. And don’t be shy – come say “Hi” to me at the DJ booth!

You might also enjoy a breakdown of the weirdest moments, or maybe you just like the rough-cut sexy parts. Don’t mind if we do: