You know that when there are two chances in one night to ogle male models and clothes, gays are all up in the planning and execution. That’s certainly true for AEN’s Swim 2010 and the Drop Dead Gorgeous runways on Thursday. Throw in Caliber models at one and Rob Marciano at another, and it’s a night to remember.

Back in 2008, the Atlanta Executive Network got the bright idea to partner with the old David magazine for the first Swim event to promote the models in boxcuts and speedos from Boy Next Door in its annual May swimsuit issue.

Even though the magazine changed hands and the swimsuit ties are undone between the two, the gay professionals’ networking group still runs with the popular swimwear runway show each year. Swim 2010 takes place at the Jungle.

“AEN is really excited about it,” says Justin Ziegler, AEN’s executive director. “It’s one of our better attended events, it’s more social than some of our programming, and people come that may be new to AEN, so it’s fun for our members because they get to meet new faces, and it drives new membership with the extra exposure to what the organization is all about.”

Swim 2010 adds a new partnership that is sure to heat up the runway even more. The male and female models of Caliber Enterprises are in the mix.

“Caliber is a great fit because we want models that appeal to the whole community, and they have that diversity,” Ziegler says. “And our female membership has grown over the last couple of years, so it’s perfect.”

Fans of Project Q’s daily Morning Fix may remember a few local Caliber hotties like Tucker and Caleb (photo, l-r), as well as Icaro, to point out just a few.

Swim 2010 brings back the swimwear of Boy Next Door as well as DJ Kevin Durard and host with the most Princess Charles. A raffle of great prizes is also set as part of the fun. 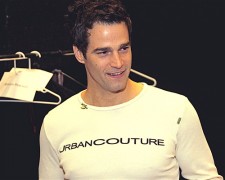 In addition to Grady’s Urban Couture Seniors Fashion Show that bowed last week, gay fashionistas probably know Martinez best for his work with Pets Are Loving Support. Among other fundraising efforts, he is the organizer of PALS’ annual Doggies on the Catwalk (view photos).

As if you need an excuse, you can find a reminder of why the gays love Marciano’s warm front here.