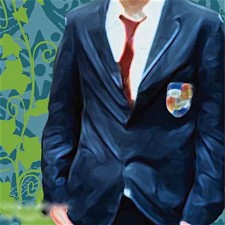 Like the main character of his play “Good Boys & True,” gay playwright Roberto Aguirre-Sacasa attended an all-boy Catholic school, yet no scandals marked his stay like they do in Actor’s Express latest show.

“Good Boys & True” opens Thursday. It takes place in the ‘80s at the private St. Joe’s Prep School, where the boys tend to be over-privileged and bound for Ivy League universities.

Brandon Hardy (Louis Gregory, second photo) is an upper-class student who decides to have sex with a lower class young woman, videotape it, and then show it to his football buddies. Complicating matters is the fact that he is also having a relationship with Justin Simmons (Brent Rose), a fellow student.

Naturally, the tape is discovered by the football coach, who takes it to Brandon’s mother Elizabeth Hardy (Tess Malis Kincaid). Brandon denies that it is him in the videotape, although his teammates seem to know it is. 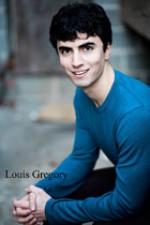 Aguirre-Sacasa says that Brandon’s decision to have sex on videotape goes beyond trying to deny to himself and others that he is gay.

“A part of Brandon does it because he feels he is entitled,” he says. “He is very centered on getting on what he wants from Justin. With the girl, it’s a little game he and the football guys play, almost like ‘Who can be the most appalling and get away with it?’”

The show premiered at Steppenwolf in 2007 and was later staged in New York. Since then, it has been performed across the country. Originally, it dealt more with the relationship between Brandon and Justin, but after some re-writes, it became more about Brandon and his mother, the playwright says. The showdown between the two provides some of the play’s more dramatic moments, as Elizabeth tries to deal with her son’s secrets.

“Elizabeth is in the style of a Douglas Sirk heroine,” Aguirre-Sacasa says. “The husband is away, and she is having to face things, including what she has done to make the son the way he is.

“I don’t think Elizabeth is homophobic,” he continues. “I do think she has an idea that Brandon has gay tendencies. She would deny it and never talk about it, but now she must talk about it.”

Director Melissa Foulger, herself an out lesbian, says the play’s strong narrative thread and the complex relationships made her want to direct it.

“I love how this show deals with the mother and how she perceives her child,” she says. “It also deals with how children can do things without thinking of the consequences.”

Aguirre-Sacasa’s work has been a regular fixture in Atlanta. Three years ago, Actor’s Express produced his play “Based on a Totally True Story.” Before that, Dad’s Garage staged three of his works—“Say You Love Satan,” “The Weird” and “Weird Comic Book Fantasy.” Foulger worked with the playwright on “The Weird” and is enjoying collaborating with him again.

“I like his writing – his nuances, his references to pop culture,” she says. “This is a departure for him, but he keeps his trademarks.”

Foulger herself is no stranger to Actor’s Express. Most recently, she directed a well-received version of Tennessee William’s “Suddenly Last Summer” at the company last year.

Besides his plays, Aguirre-Sacasa has written for the HBO series “Big Love” for the last two seasons. This season promises a major gay angle, he says, among two of the male characters. His episode is the third of the new season, and “a lot happens” in that particular episode, he promises.

The writer regards Atlanta as one of his hometowns, since so many of his plays have been staged here, and is planning to come down and see “Good Boys & True” before it closes.