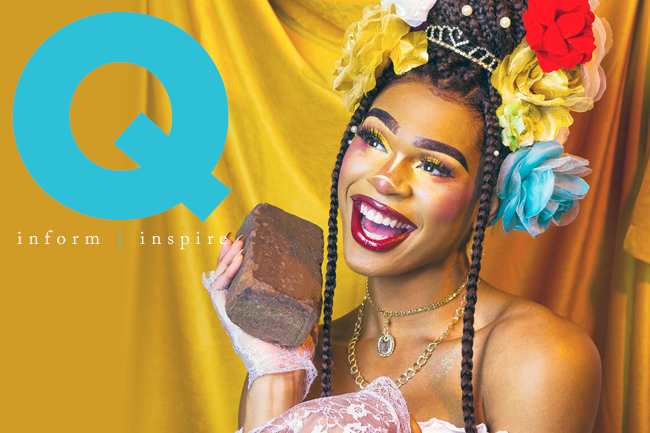 Six weeks after Stonewall, two weeks after the moon landing, one week before Woodstock, and on the night of Sharon Tate’s murder, another legend was born. My brother turns 50 in August, so I’ve been reminiscing about five decades of being each other’s touchstone.

Not that I remember those other milestone events of that summer with much clarity beyond hazy TV images, being just four years old at the time. I do still remember quite clearly the day my favorite person and my OG ally was born, and the years of fights, hugs, tears, belly laughs and unbreakable connection that followed. Though neither of us knew it, it was an epic summer of history, hope, horror and hippies that would irrevocably shape the setting and context of our youth.

The events during those hot middle months of 1969 ultimately made growing up queer different, too, than it was for our predecessors. The possibilities were wide open, the struggles were public, and there would be no turning back. Witnessing first-hand wave after wave of social change shaped who we became as a society, as much as siblings shape each other as people, and it’s a privilege just to be here looking back at it all.

Hundreds of thousands of our brethren didn’t make it out of those years alive. Despite being in the prime of their lives, gay men succumbed to AIDS for nearly 15 years before effective drugs slowed the funeral procession. Countless more lesbians, gay men, bisexuals, transgender people and other queers and allies also aren’t around anymore to tell us what LGBTQ life was like before, during and directly after Stonewall.

Some of those souls would sit in awe of how quickly we went from avoiding marriage and the military as perks of being queer, to feeling the necessity of attaining those rights to choose. The same people might also sit in awe that we still have so much ground to tread on the long arc of equality.

Experienced only QTPOC reclaiming their due, not the years of attempted erasure that preceded it,

Haven’t seen LGBTQ people of every stripe dragged away by police during civil protests,

Have always had queer role models in mass media,

Roll their eyes at corporate rainbows and pandering pop stars without understanding that they still count as progress,

Stonewall Weekend gives you a chance to catch up to history, and it gives the rest of us a chance to reflect and make plans. All of us have an opportunity to mark the occasion however we see fit and arm ourselves with grace and gratitude for the challenges ahead.

The Queer Agenda calendar of events packs a punch of commemorations and celebrations of queer culture for Stonewall Weekend, including Atlanta's first Stonewall March.

Speaking of big personalities and evolving cultures, Kenneth Figueroa, who some may know better as DJ Esme, talks about his work to create a more inclusive LGBTQ Atlanta nightlife in our Q&A interview. We also feature an interview with comedian Ky Krebs who makes his Atlanta debut this weekend.

Meanwhile, The Q advice column tries to up your hookup game with a little more respect for our queer siblings and fellow humans. As always, the Q Shots photo galleries catch you smiling. It’s a lot to think about as we go forward into this 50th summer since Stonewall, but you can handle it with the strength of those who have gone before.

Happy early birthday, little brother, and happy anniversary, queer siblings one and all.