Casey Cagle: I won’t stand for discrimination as governor 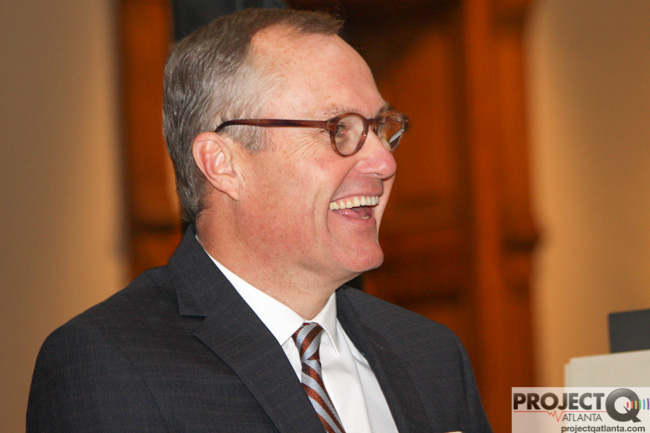 Cagle formally kicked off his gubernatorial campaign on Sunday with a rally at the Infinite Energy Theater in Duluth. He dissed discrimination against anyone and said that a “religious freedom” bill long sought by religious conservatives at the State Capitol isn't needed.

Both of those are positive signs for LGBT people that Cagle's positions are evolving. But he delivered the remarks with caveats – and they are set against his long history of supporting anti-LGBT measures and backing divisive “religious freedom” bills.

What the Republican said Sunday during his campaign announcement, via the Associated Press:

Cagle said he “will not stand for discrimination in any form” if elected governor, including acts against “individuals of faith.”

“I believe that our current law and our current constitution – both state and federal – does protect our religious liberties,” he said. “But if there is a problem, then I will be a governor that will seek to find a solution to that.”

And his pledge not to throw any Georgia under the rhetorical bus during his campaign, via the AJC:

“I’m not going to run a campaign against anyone. I’m running a campaign for a brighter future for Georgia. That message will be around this vision that I’ve outlined. I want this to be a substantive debate, a substantive evaluation of public policy. All of us benefit when we do.

“The people of Georgia are fed up and tired of negative campaigning. If all you have as a candidate to run on is to tear someone else down in an effort to make yourself look good, you don’t deserve to be in office.”

Just to reiterate, via the Gainesville Times:

To reinforce his point, Cagle was joined on stage by Melvin Everson, the former executive director of the Georgia Commission on Equal Opportunity. The Republican once criticized anti-LGBT “religious freedom” legislation as “way out of whack.” Then again, Cagle was also flanked by Fran Millar, the state senator who in 2016 commended North Carolina lawmakers for taking a principled stand when they passed anti-LGBT legislation.

“Well, obviously, predominantly the issue around religious liberties was addressed, as you know, last year. And we’re in a different environment today,” Cagle said. “The environment is one where we have a new president. A president who is going to, I think, appoint a justice that’s going to be conservative. And much of the fears that existed prior to that may have subsided some.”

But just a year earlier, it was Cagle who presided over a Senate as it approved an anti-gay bill and couldn't contain himself after it passed as he expressed victory over “radical Atheist groups.” The bill created a national controversy and sparked a veto from Gov. Nathan Deal, yet Cagle kept defending the legislation by lying about it.

Cagle's anti-LGBT views run deep and run long. As a state senator in 2004, he voted in favor of a ban on same-sex marriage that lasted until 2015 when the U.S. Supreme Court legalized gay marriage across the country. When the high court did that, Cagle was not pleased.

Lt. Gov. Casey Cagle, a Republican, acknowledged the decision but was in no mood to celebrate it.

“My faith teaches me that marriage is between a man and a woman,” Cagle said. “I also understand the role of the Supreme Court under our Constitution. As we navigate this challenging issue, we must do so in a way that respects the deeply held religious beliefs of many like myself while also upholding the rule of law.”

Even after the court decision in 2015, Cagle tried to convince supporters to start a new fight against gay marriage in Georgia.

In 2008, he and other legislative leaders were named in a lawsuit by Vandy Beth Glenn, a legislative editor at the Gold Dome who was fired she announced her transition from male to female. Cagle and the other lawmakers fought the lawsuit, which they lost in 2011. That's when a three-judge panel of the Atlanta-based 11th Circuit U.S. Court of Appeals ruled that discrimination against a transgender person based on gender-nonconformity is sex discrimination and upheld a lower-court ruling that the firing of Glenn was based on sex discrimination.

Also in 2011, Cagle cuddled with anti-gay pastor Paul Voorhees and had him serve as chaplain of the day at the state Senate.

Despite what Cagle is no longer saying publicly about LGBT issues, he's likely talking about them privately, considering his personal brand of politics. He admitted as much to the AJC in 2015:

So how to explain last week’s moves? Cagle reminded me that he’s considered himself a social conservative throughout his 20-year Capitol career. He’s supported efforts to place the Ten Commandments in public spaces. He backed efforts to remove abortion coverage from state employee health insurance plans. This is, after all, the man who lured religious conservatives away from Ralph Reed in 2006 to become the first Republican lieutenant governor.

“I don’t always engage in those things in a public way,” he said. “A lot of times I engage with them in a private way to get an outcome that is conducive. This is not anything other than vintage Casey Cagle and what I’ve done for many years in public life.”