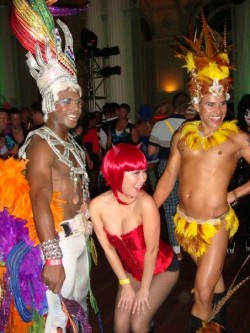 When you throw a party so spectacular that it blows out the power of one of Atlanta’s historical markers, all that’s left to do is apologize to the well-costumed queens who paid $65 to $100 per ticket.

So that’s what Jerusalem House, organizers of last week’s “Carnevale After Dark,” did yesterday. And again today with a missive to supporters of the agency that provides permanent housing for people with and affected by HIV. The title of the eblast? “A Memorable Event!” Indeed.

On Monday, organizers told us that electrical problems and fire alarms at historical host the Biltmore Hotel prompted the early closing of the event. In turn, that would impact the amount they expected to raise. The numbers are still being tallied, but organizers — in advance of the party blow out — hoped to raise between $50,000 and $70,000 with “Carnevale” on Friday.

On Tuesday, organizers thanked patrons for their “patience and understanding.”

On behalf of the Board, staff and residents of Jerusalem House, we thank everyone who attended and supported our 2009 Halloween Bash – Carnevale After Dark at The Biltmore on Friday, October 23.  The annual event raises funds for the four housing programs serving our 200 residents who are homeless and low-income men, women, and children affected by HIV/AIDS.

Due to a power outage and two fire alarms that resulted in the evacuation of the building, our event was regretfully forced to end earlier than scheduled.  Jerusalem House and Biltmore (Novare Events) staffs worked together that evening to resolve the situation, but unfortunately, power was not restored to the north end of The Biltmore until Sunday due to a mechanical equipment failure.

We sincerely appreciate everyone’s patience and understanding with this situation.  We were charmed by everyone’s creativity with costumes, and we hope that guests enjoyed their time – however brief – at the event.  Photographs will be available at our website shortly.

Organziers also announced the six lucky winners of the raffle, which didn’t take place due to the evacuation.