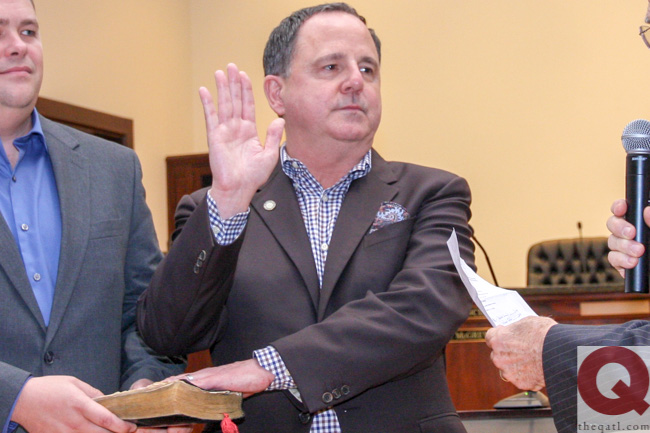 Outgoing Mayor Gene Hobgood administered the oath of office as Grant’s husband, Jeff Brown (photo left), stood beside him. A packed audience at Canton City Hall gave Grant a standing ovation after he was sworn in.

“I couldn’t be more proud to represent this great city and all of you wonderful citizens,” he told the crowd. “I always say this was the city that chose me when I drove here back in 1996 under circumstances that I say were out of my control — it just pulled me here.”

Hobgood — who decided not to run for re-election after serving three terms in office — presented Grant with a gavel with Grant’s name inscribed on it. Canton is located 40 miles north of Atlanta and has a population of 29,000, according to the U.S. Census Bureau.

Grant beat civic activist Dwight Pullen by 50 points in the November election. Grant served on the Canton City Council and as Mayor Pro Tem since 2014 but gave up his seat to run for mayor.

He told Project Q Atlanta in November that the voters judged him on his merits, not his sexual orientation.

“In the end, Canton voters could care less that I am gay,” he said. “They just want the best person for the job.”

Grant told the crowd on Thursday that the city has “much work to do.”

“We have a lot of challenges and a lot of opportunities,” he said. “It’s going to take all of us to make our realities come true and making Canton, Ga., the coolest small town in America.”

Former Doraville City Councilmember Joseph Geierman beat incumbent Mayor Donna Pittman by 30 points in a December runoff election. He will become the fourth openly LGBTQ mayor in Georgia when he’s sworn in on Jan. 6. Gay IT professional Andy Yeoman will also be sworn in to the Doraville City Council, becoming the second current openly LGBTQ member of the council, alongside Stephe Koontz.