Can you be too gay for online cruise sites? 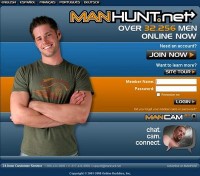 What if you’re too effeminate or too Goth and you know most guys aren’t into that? Here’s how to, ahem, massage the truth without actually lying.

Should you lie on the profiles of gay dating sites if you know you don’t fit with what most guys are looking for? Few profiles ever say, FLAMING HOMOSEXUAL, but they may as well for all the hits you’re going to get.

Yes your interests include gardening and cooking. Does that make you Martha Stewart? Should you lie and change you interests to wrestling and bowling? Or should you just state flat-out, “I’m a raving, flaming queen who deserves a little respect…and a date once in a while!”

The truth is, just because you should never lie about things that matter doesn’t mean you can’t put those matters in the best possible light. Instead of saying, “I’m a raving queen” why not say, “My closet door is so open it’s practically hanging off its hinges.” Instead of saying, “My favorite song is YMCA,” why not say, “My favorite chant is, We’re Here, We’re Queer, and We Don’t Like Your End Tables!”

In other words, keep it funny. Make them laugh and you’re halfway up their legs.

The same “should I lie” question applies to Goths. No, you’re not some gigantic land whale or drooling three-armed trout-man, but you are gay Goth in a world in which if you aren’t “normal ” then you’re a freak to be ignored. You’ve tried the Goth clubs but they tend to have quality control problems and when you go to regular clubs, you end up being a one man Leper Colony. Same online.

What to do? Honesty is always the best policy when it comes to meeting someone but you don’t want to jump out and say, “Oh, by the way, I look like the love child of Bella Lugosi and Sixouxsie Sioux.” How do you get more hits on the gay internet sites and convince prospects that it’s not their blood you want to suck?

Let’s face it, the rising popularity of tanning booths did nothing for you guys. You could put your Goth pics up but your hit rate would fall faster than Marie Antoinette’s guillotine.

I put “Goth” in Manhunt’s search engine and got only four ads within a 50-mile radius of Manhattan. Imagine what it is in other cities. Clearly, Goths are not in high demand.

My advice: Post your regular pics—the ones that wouldn’t scare the moss off a rock and introduce the subject lightly, like this one guy did in his profile: “I’m shy, a bit of a loner, but sweet, like to hang out, drive around in my car, and have fun. I’m into the Goth scene, like dark clothes and dark music. Looking for friends, maybe more.” It doesn’t matter whether you’re into Goth or something really embarrassing, like Paris Hilton; your best bet is to put it into context so it doesn’t feel so threatening.

The bottom line: Tell the truth. But tell it well.