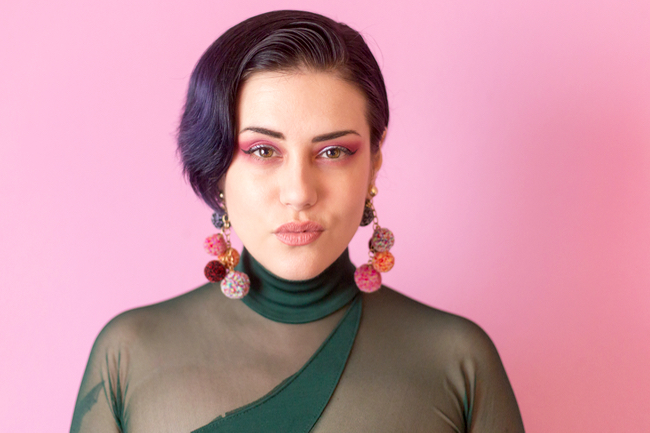 In order to be respected by the bro culture that exists even within progressive political punk, people are expected to palpably package their femininity in order to be taken seriously. Whether or not an outspoken feminist who challenges the “feminine,” an individual who adheres and amps femme kitsch, or a mixture of both, femspace is always under attack.

And the cishet white male isn’t the only problem. This exists in the gay community, too, especially in popular gay bars and hookup culture well known to be discriminatory. Whereas many spaces exist for femmes regarding performance art and drag, I’m surprised how much Midtown needs to catch up on the queer- and femme-friendly fronts.

Feminine men experience much of the same hardships that straight women deal with in dating and the workplace. Femininity is seen as frivolous, while masculinity continues to rule the roost. Whether gay or lesbian, the homo hierarchy gives privilege to masculinity.

Yes, in theory, homos do celebrate femininity more loudly than the hets, but as queer awareness pushes to the forefront and secures spaces where the feminine demands and gets respect, it’s often a bubble compared to the homonormative cis gay male reign.

Atlanta abounds with examples of Midtown bars that are not entirely open to femmes. Femme community is around, but the support they crave is usually located elsewhere.

My fantastical ass wants to live in a pink kingdom of fierce femme fluff, but even if I’ve personally disliked what I see as ATL’s baseness and lack of flamboyance, I’ve never felt an intense need to escape it. I am cis-esqe and seen as a person who fits my assignment – a feminine “woman” who aligns with some socially acceptable presentation.

Though my campiness in performing femininity may be somewhat shunned, I am not threatened in any way for being “girly.” However, being close to many feminine queers that are not AFAB, I spy some serious fuckwad discrimination towards transwomen, non-binary AMABs, and even some of the common gay boy bottoms in our potentially wonderful queer city.

Transwomen have always faced issues of judgment, their identities ridiculed and safety threatened. You have to be living under a rock to not know that transwomen are harassed, assaulted, and murdered more than any other subset of queer identities.

The narrative of tragedy for transwomen is in regular rotation in the news. Transwomen of lower income are given less protection and therefore face potential attack more often, usually by the hands of violent men who also fetishize and sexualize transwomen.

Fear should not be a keystone of the trans experience, yet the common everyday cis gay does not think twice about making derogatory remarks. To turn around and socially discriminate against transwomen, even in minor commentary, perpetuates a history of violence that claims transwomen are deserving of abuse.

This same rhetoric follows any “girly” gay, femme lesbian, etc., that is made to feel invalidated or humiliated by judgmental energy. Too often, I see critiques from all angles dissing those who are too “sensitive,” feminist, passionate about exploring serious issues, or on the flipside, appreciate cuteness and kitsch, or just simply allow their gender expression to shine through.

Though social media and dialogue has more commonly placed the fem-centric into the light of accessibility and acceptance, don’t fool yourself: Femspace is always under attack.

Participating in jokes or even coldness towards the fem-centric is participating in abuse. So what if the outside hub of heteronormativity perceives queers at large as hella feminine? Our world is usually only seen through selective sissy-tinted sunnies.

If only they knew the brutal standards of the gay community, the disgusting popularity of “No Fats, No Fems,” and the rampant rudeness of abundant anti-POC disclaimers on Grindr profiles.

Sunni Johnson is an out freelance writer in Atlanta with interests in the arts and social justice.

This article originally appeared in our Q magazine print edition. Pick it up around town, and read the full issue below: