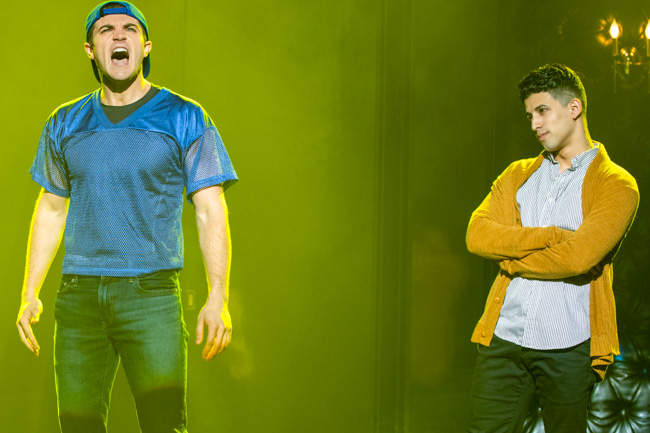 It’s been 20 years since the cult-hit teen film “Cruel Intentions” hit the big screen, and now a musical version of the film comes to Atlanta packed with ‘90s hit songs and an expanded gay storyline.

“Cruel Intentions: The ‘90s Musical” plays Cobb Energy Centre on May 15 as part of a national tour. The film starred Ryan Phillipe and Sarah Michelle Gellar as diabolical step-siblings who place a bet on whether Phillipe’s character, Sebastian, can deflower the headmaster’s daughter, played by Reese Witherspoon.

Out actor David Wright, who stars as gay schemer Blaine Tuttle in the musical, said the film was “one of [his] earliest gay memories.”

“I would sneak-watch it because if my parents saw me watching it, I’d be in trouble,” he told Project Q Atlanta on a call from a tour stop in Hartford, Conn.

Wright (photo right) said the role of Blaine “came out of nowhere.”

“My friend was out to dinner with one of the casting directors and they said that they needed someone to play Blaine and needed someone that was ethnically ambiguous and my friend recommended me,” he said.

“What I liked about Blaine and tried to make him in the musical was you understand him a bit more,” he said. “He’s a bit conniving, especially in the movie. Blaine and [Greg] are kind of the comic relief of the show and you see the arc of their whole love story.”

“For Blaine to break out singing Backstreet Boys ‘I Want It That Way,’ you think that might seem odd,” said Wright. “But listening to the lyrics in that song, it makes so much sense for what Blaine is going for.”

The “Cruel Intentions: The ‘90s Musical” national tour started in March and wraps up June 2 in Philadelphia.

And now, 20 years later, Wright doesn't have to hide his “Cruel Intentions” fandom from his parents anymore.

“My mother saw it last night and she loved it,” he said.