Calling all queens: Your night is Thursday 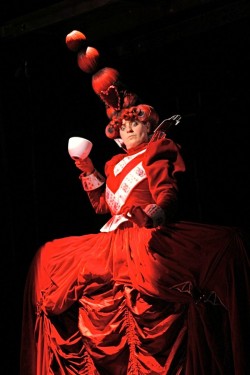 Oh, to be a queen for a night. You get the chance on Thursday thanks to the Alliance Theatre and its topsy-turvy production of “Lookingglass Alice” and an evening created just for theater queens.

The show – the stage adaptation of two of Lewis Carroll’s books, “Alice’s Adventures in Wonderland” and “Through the Looking Glass” – is wonderment enough. Think Cirque du Soleil but with live theater and outsized characters. The Alliance, though, is creating an evening on Thursday built truly for queens – you know, of the Midtown variety – and the gay boys who fancy becoming one.

The show nearly takes a backseat to Thursday’s Queen Night: There are drag queens, costumes, a DJ, specialty cocktails, a reception, and, best of all, discounted tickets to make the evening a bargain fit for, well, a queen.

“We wanted to do just a big fun event in conjunction with ‘Lookingglass Alice,’” says Joe Gfaller, associate marketing director for the Alliance. “Because of the premise of ‘Lookingglass Alice’ – a girl who wants to become a queen – we’ve already got such a fun, fantastical environment on the stage for the show.”

So the theater is inviting its LGBT fans to arrive in costume on Thursday, view the production and enjoy a post-show party at Drama Dish and a chance to be crowned Best Dressed Queen. On hand to judge the contestants is someone who knows queens and costumes pretty well – Stasha Sanchez, Miss Gay USofA 2009. Nicole Paige Brooks, a local favorite and one of two Atlanta queens competing on “RuPaul’s Drag Race” this season, will also be on hand.

“You usually don’t see people in drag at the Alliance,” Gfaller says.

But everyone’s a winner on this Queen Night: Use promo code QUEEN15 when purchasing your ticket to receive a 15 percent discount and a complimentary drink at the post-show party. You can pick from two signature cocktails designed just for the evening – the QueenTini and Mad Hatter.

Even with the discount, $1 of each ticket will be donated to the PFLAG-Atlanta Scholarship Fund in the name of Derrick Martin, the gay teen from Cochran, Ga., who was kicked out of his home last week after lobbying his school for permission to bring his boyfriend to the prom next month. 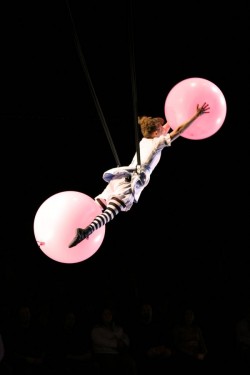 “We are encouraging people to get decked out as however they see the queen inside them. They can come as Princess Elizabeth or they can come as a fabulous drag character. The judging is entirely at the discretion of Stasha, so dress to impress Miss Gay USofA,” Gfaller says.

Before the Queen Night post-show party, the audience is in for a treat: “Lookingglass Alice,” which is in previews until Opening Night on April 7, features a cast of just five actors who play about 40 characters in the show. “Alice in Wonderland” features Alice falling down a rabbit hole, but in “Lookingglass Alice,” she steps onto her mantle and through the lookingglass to a chessboard.

Her journey takes her from being a pawn to becoming a queen. But in this show, she does so through an aerial spectacle that includes audience members seated on stage in a radically reconfigured Alliance.

“Lewis Carroll was this champion of the irrational, champion of nonsense saying hold on, stop. Don’t be in a such a hurry to grow up,” creator and director David Catlin says in video about “Lookingglass Alice.” “In a way, it is telling myself and other grown ups — reminding us how to play.”

“Lookingglass Alice” runs March 31 to May 2 at the Alliance Theatre, 1280 Peachtree St. NE. Buy tickets online. For Queen Night on April 1, use promo code QUEEN 15 for a discount and to receive a complimentary cocktail at the post-show reception.