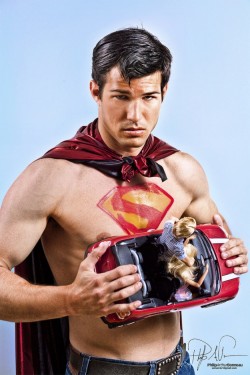 Philip Bonneau’s “Heroes + Villains” photography series is really gaining steam in gay Atlanta. If you saw his “Issue #2” show and thought, “I’d love to get in on that,” now’s your chance. After a packed opening (view photos) for shots of local gay hotties as sexed-up superheroes in his latest exhibit at the MISTER Center, Bonneau is already putting out the casting call for “Heroes + Villains, Issue #3.” The first two exhibits in the series put hot models in the guise of comic book legends that shed new, artsy light on the characters, the male form and pop culture. “Heroes + Villains Issue #1” focused on Marvel legends, and “Issue #2” put a super-sexy twist on DC Comics characters. Bonneau expands the idea for “Issue #3.” He’s looking for models to pose as characters from cartoons, movies and other comics that he hasn’t delved into yet. “This will be my biggest show and steps me out of comics a bit and into other realms that are equally considered ‘Heroes + Villains’ and characters people pretended to be,” Bonneau says in his announcement of the casting call. Always wanted to pose as your favorite fictional alter ego? Think you’ve got what it takes? Check out the casting call below for more information, including a new gender-bending twist and characters that have already been cast, then message Bonneau on Facebook to apply and get all the details.

‘Heroes + Villains Issue #3 Casting Call The third Issue of Heroes + Villains is going to the benefit of Atlanta Cotillion this summer. Conditions for this show are 1. Female models must be male characters. 2. Male models must be female characters. 3. Costumes are collaborative between the photographer and model, but I would like to see what the models bring to the table within the parameters of costumes made with all or some everyday items. Make-up and hair will mostly be up to the models with some exceptions. 4. $50 dollars buy in to cover production cost at the end. I’ll consider switching out one character for another if a concept can be come up with. CARTOON He-Man She-Ra – Cast Skeletor – Cast Evil Lyn – Cast The Sorceress Liono Mumm-Ra G.I.Joe Barbie Rainbow Brite Strawberry Shortcake Bitch Puddin’ MOVIE Ariel – Cast Ursula Snow White Evil Queen Cruella De’ville – Cast Captain Hook Peter Pan Medusa – Cast COMICS Storm – Cast Emma Frost – Cast Rogue – Cast Dazzler – Lady Deathstrike – Cast Phoenix – Scarlet Witch – Cast Thor – Cast Loki The Mandarian – Cast Magneto The Penquin – Cast